Megan Thee Stallion has told BTS she wants to do a "big" collaboration with them next time. 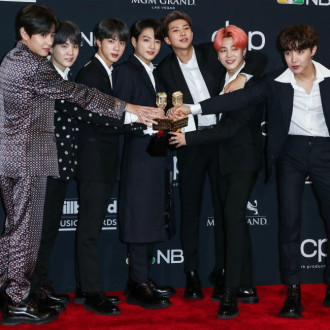 BTS and Megan Thee Stallion have hinted at doing another collaboration.

In a conversation captured in their latest vlog on their YouTube channel, Megan told the Korean boy band: “Whenever we do another song, I feel like we gotta do it big. We gotta do a video, and it’s gonna be happening."

To which, RM replied: “After we listened to your rap recording [for the remix of ‘Butter’], everybody was so impressed and so grateful."

Megan added: “No, I was so happy and I was so grateful.

With 'Butter', Megan found herself in a sticky situation with her record label.

The Grammy-winner accused her 1501 Certified Entertainment of preventing the track from being released in a petition filed in a Texas court in August.

In the end, a judge granted the 'WAP' hitmaker permission to release the remix.

The 'Savage' star - whose real name is Megan Pete - had insisted not letting the remix be shared with the world would put “her music career will suffer irreparable damage, including a devastating impact to her relationships with her fans and with other recording artists in the music industry”.

According to Variety, her lawyer also claimed that 1501 didn't think the remix was “good for her career as a recording artist”.

BTS have since teamed up with Coldplay on 'My Universe', which outsold all of the songs in the top 10 of Billboard's Digital Songs Sales Chart combined.

Meanwhile, the group recently admitted they have struggled with the "pressure" that comes with being global megastars.

Using the Korean expression meaning lack of ability or small-mindedness, Suga said: "We are not exceptional people — our plate is small. We’re these rice-bowl-size guys getting so much poured into it. It’s overflowing.”

V added: “The pressure has been overwhelming.”