Victoria and David Beckham treated their eldest son Brooklyn to a lavish meal at Michelin-starred London restaurant Locanda Locatelli on Sunday (03.03.13), a day ahead of his 14th birthday, where they were joined by family and close friends. 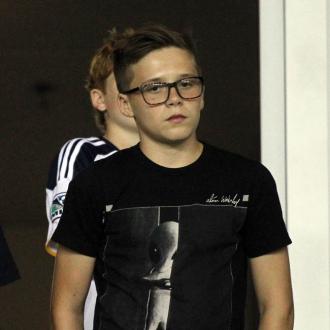 Brooklyn Beckham celebrated his 14th birthday with a family meal on Sunday (03.03.13).

Victoria and David Beckham treated their eldest son to a lavish dinner at Michelin-starred restaurant Locanda Locatelli in London a day ahead of his special day today (04.03.13), with his siblings Romeo, 10, Cruz, eight and 19-month-old Harper alongside him.

David, 37, drove his family to the eatery, where they were met by their close friend Tana Ramsay - wife of celebrity chef Gordon Ramsay, who arrived with the couple's children Matilda, 10, 12-year-old twins Jack and Holly, and Megan, 14.

Brooklyn's grandparents - Victoria's parents Jackie and Tony and David's mother Sandra - also joined in the celebrations, which were given a personal touch by red and black balloons in honour of the teenager's favourite soccer team Manchester United.

It was only last month the glamorous couple had hired the Electric Cinema in London's Notting Hill for Cruz's eighth birthday (20.02.13), where the family enjoyed dinner at the venue's American-style diner before sitting down for a film in their own private screening room.

The celebrations were said to be ''perfect'' for Cruz, who spent a majority of his childhood in Los Angeles while his soccer star dad played for team LA Galaxy for five years from 2007.