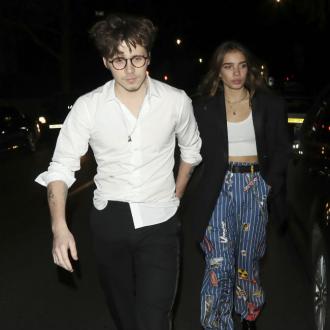 Hana also shared an Instagram video of herself and Brooklyn in the early hours of Tuesday morning, in which she kisses him on the cheek.

The happy couple were spotted singing and dancing along to The Jacksons' 'Blame It On The Boogie'.

Meanwhile, Chloe recently confessed that her public displays of affection with Brooklyn were an act of rebellion.

The 'Kick-Ass' star - whose relationship with Brooklyn ended earlier this year - admitted they were often captured kissing by the paparazzi because of her rebellious attitude.

She conceded: ''The problem with me is that I'm fairly rebellious, in the sense that if people tell me not to do [something], I'll be like, I'm going to do it, and I'm going to jump in head first and do a flip.

''I was like, 'Why can't I kiss on the street and do all of the things that my friends are doing?' And you can - you can do whatever you want - but then I'd come home and be mad that there's a photo of me kissing on the street.

''And my brother would [say], 'Chloe, you can't be mad, because you did that! Yes, your friends are doing that, but you are not your friends.' I started to see [I was] only hurting myself.''