Britney Spears' team has banned booze backstage at 'X Factor', saying minibars must be empty and wine must not be given to her as a present. 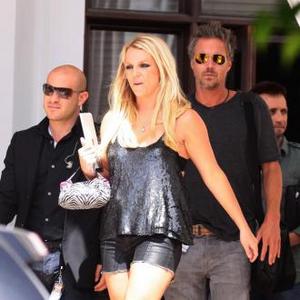 The 'Hold It Against Me' hitmaker - who joined the panel of Simon Cowell's music talent hunt alongside Demi Lovato this year - has made sure she will not be tempted by booze, with her team banning the possibility of her accessing it.

According to USMagazine.com, her representatives said in a note: ''Very important. We require you to empty minibars of all alcohol. And no gifts of wine or any other alcoholic beverages, please.''

Drink is not the only thing Britney - who is also joined by L.A. Reid on the judging panel - is believed to have banned from the show; pretty women are also no allowed backstage.

A source said recently: ''Britney has stipulated that none of the backstage staff working with her are too pretty or stylish.''

However, the singer claims she is having a great time on the programme, even though she did want to quit after shooting the first episode.

She said: ''I was really nervous. You have all these people behind you and you know they're rooting on you. It's a really exciting, electrifying thing to do.''