Five piece Bridgwater band BRIDGES take us through their creative process, the joy of writing songs and playing live.

After releasing their latest single, Go Long, on the 5th May, BRIDGES are gearing up for the release of their new EP, Empty Galleries, and a tour later this year. The five piece Bridgwater band, consisting of vocalist Ethan Proctor, guitarist Josh Redman Thomas, bassist Henry Matthews, keyboard player Chessa Williams and drummer/driver Tom Farkas, have been working hard during the pandemic "writing loads of new music." Having previously played at the Glastonbury, 2000 Trees and Isle of Wight festivals, as well as touring with Slow Readers Club and releasing a string of singles since 2017, BRIDGES now look set to take the next step in their musical career. Ahead of their busy summer schedule we caught up with them to find out more about BRIDGES, their aspirations and their influences. 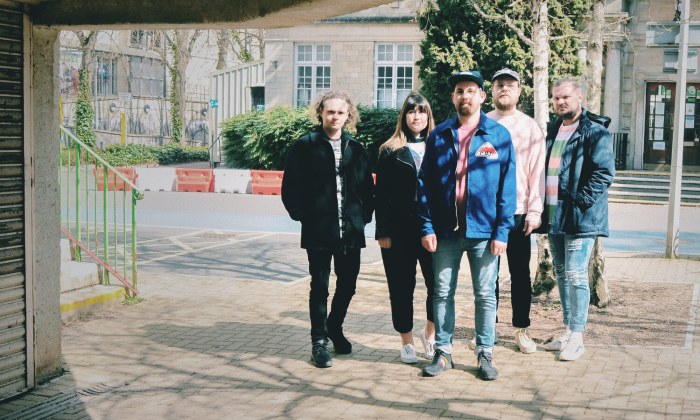 We'd file us next to bands like Manchester Orchestra, Frightened Rabbit, Death Cab & The Wonder Years – all wrapped up in our own way. We are a guitar band through and through, but have been experimenting a lot more recently with other sounds. Our music is really focused on dynamics, strong melody and honest lyrics. Getting the balance right between moments to hold back, and when to let things be more explosive – that’s something we’ve really worked to hone.

With our new single Go Long, we wanted to capture that energy despite being locked at home. Producing it DIY, we aspired to still create the feeling of being in the room with the band.

We've had some highs and lows as new bands do with some industry folks – generally though we've been very fortunate to work with some lovely people who've been really helpful. One of the biggest challenges is fitting everything in, though we've adjusted pretty well to that now. We all have day jobs and put so many hours outside of that into writing, recording and touring (hopefully gigs again really soon). Every single hour though is worth it when things start being released and we are playing the songs live.

This last year we taught ourselves a lot about recording at home using resources online. Not being able to get to a studio for this new EP could have been a big problem, but it's been such a worthwhile experience to learn how to produce our music. Lots still to learn, and we have had some great help from friends, family and much more talented mixers than us.

Getting noticed through the wall of noise is tricky, but as long as we are producing the best music you can and enjoy being a band, it's hard to be anything but happy.

It's certainly a long and challenging road, but we are all prepared for that. When we played a few shows with The Slow Readers Club we were inspired by how they have developed such an incredible following with time, great songs and hard work. It was really cool to chat to them about how they made things fit around life before going full time. That for most bands I think is a realistic expectation.

We're really excited about this new EP and what we've managed to create out of a difficult situation. The first couple singles have been well received by fans, so plan is to only grow on that!

It's certainly not a deal breaker for us – if an idea sounds good, it is good! We're open books, all quite relatively easy going so it's not difficult to get creative. Ivan and Frazer of China Bears are Ethan's brothers who are living together at the moment; they were really helpful in helping shape some of these new songs. Often they share a lot of ideas back and forth through phone demos anyway, but it was nice to actually work on some recordings together that would see the light of day. Our friend Ash Scott has always been a great help for recording, and in that process new ideas tend to be formed.

In the future, we'd love to work with more of our friend's bands, as well as producers and mixers who are held in high regard.

Sonically we are very influenced by the guitar music. Those mentioned at the start are key, but loads of bands from rock, indie and pop, through to metal and punk. Our lyrics are very honest and personal, but written in a way that we aim for listeners can find their own stories in. So many songs have been written about experiences and the people that we value the most in our lives. We are very lucky people!

Art, movies, TV, video games all have inspired songs in the past – would love to sound more intellectual and say we were inspired by loads of books too, but none of those yet have made it into the set just yet.

Music wise we could go round and round without deciding on one person, so instead the dream collaboration would be for something visual. We are such movie and TV buffs, having a video masterminded by someone like Phoebe Waller-Bridge would be amazing. Her work is so real, yet comical – absolutely love it.

TV and Cinema are such a big influences on our lives; we’ve just not yet been able to fully flesh out that side of our bands creativity. One day though!

Tom always seems to get the short straw for long drives, but he absolutely hates parking and it can really wind him up going around in circles looking for a space. When we played Glastonbury he had completely forgotten where he’d parked that morning, with all our gear in the car and our set fast approaching. He kept calling Ethan who hadn’t even seen Tom that day, let alone his car, asking where it was... At the time it was very stressful, but in hindsight now it’s a very fun memory.

Maybe a little generic, but making records and playing shows has always been our goal! We aren’t too far away now from that first one we think. Playing festivals and supporting the bands we aspire to, and then getting to headline rooms across the world ourselves. We'd love to tour Japan, both Josh and Ethan have been learning through the past couple years. Josh is much better though…

Generally, grabbing every opportunity we can and having the best time!

We've been writing loads of new music through the last 12 months and have the aim to be releasing our first album sometime in 2022. Mostly we are just excited to be able to tour again, hang out with friends and get back to doing what we love the most – playing shows and meeting people!

We’d love to be doing our first tours of Europe, have a few ideas to do that but lots of details to work out there.

Go Long was just released on the 5th May which is the second track on our new EP. The singles are going to be staggered over the next couple months, so excited about these! Happy to also be touring again later in the year, all shows on sale from www.bridgesofficial.com/gigs