Binx Walton wants to do something 'real' after modelling

Binx Walton has hinted that once she has finished her modelling career, she would like to work with people who ''inspire'' her as the fashion world gives out the wrong message to youngsters. 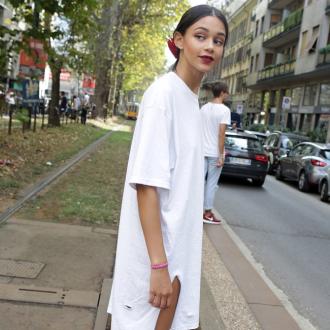 The 19-year-old model - who released her new Binx for Superga shoe collection today (25.09.15) - has admitted she wants to do something more meaningful than modelling in the future.

She told Vogue.co.uk: ''In this industry, we're showing kids who to be. Being models, we're kind of planting things in kids' heads that aren't the best; wear make-up, stay skinny - and even though it's a job, and we're not trying to ruin these kids' lives, it does have an effect.

''I want to do something real once I finish modelling. I want to work with people who inspire me, not people who are caught up with this whole current air of social media bulls**t.''

The brunette beauty previously said how being a part of the Superga brand has allowed her to have an insight into other parts of the catwalk world, which is a big deal for her.

She shared: ''I have always wanted to explore other aspects of the industry.

''And I'm so lucky to have such an amazing brand supporting me on not just the model side, but also the creative, directing, and designing. Which is such a dream come true for me!''

Binx follows in the footsteps of model Alexa Chung and singer Rita Ora who have both worked with the sneaker brand in the past.