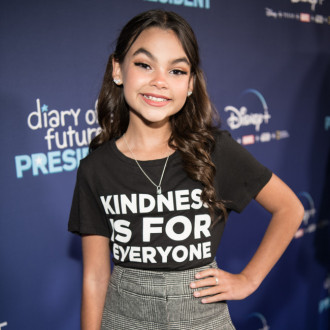 Ariana Greenblatt has joined the cast of 'Borderlands'.

The filmmaker said: "Ariana is a spectacular new talent in cinema.

"She has already worked with many of my close collaborators and everyone raves about her. She blew us all away in her audition, and I cannot wait to see her bring the wild, insane and unpredictable Tiny Tina to the big screen.

"She’s going to blow up onscreen like one of Tina’s grenades."

In the game franchise, the explosives expert's parents were sold to Hyperion as guinea pigs for genetic experiments, which cost them their lives.

Once Tiny Tina - who was introduced in 'Borderlands 2' - has escaped Hyperion's reach, she decided to get revenge on Flesh-Stick, who is the man who sold her family.

The film is set in the future when four “vault hunters” travel to the planet Pandora on a mission to hunt down an alien vault said to contain advanced technology.

Greenblatt - who is also set to appear in the likes of '65', 'In The Heights' and 'Awake' - will be part of a stellar cast, with Lionsgate assembling an all-star lineup for the big budget movie.

Cate Blanchett is lined up to play thief Lilith, while 'Jumanji' co-stars Kevin Hart and Jack Black reunite as soldier Roland and sarcastic robot Claptrap, and Jamie Lee Curtis has been cast as archeologist Tannis.

Eli recently said in a statement: “I am so excited to reunite with Jack, this time in the recording booth. Claptrap is the funniest character in the game, and Jack is perfect to bring him to the big screen."