After Life Won't Wait, and in between Rancid 5 and Indestructible, Tim Armstrong somehow found time to form his new band - Transplants, and record their self-titled debut album. The Rancid singer-songwriter, formally of Operation Ivy, gave Transplants a signature sound with a little help from his, numerous, like minded friends. After pitching the idea to Skinhead Rob (Robert Aston), Armstrong developed his original ideas and built the band that would become Transplants. From it's early inception in late 1999, Transplants grew from Armstrong and Aston to not only include Blink-182 drummer Travis Barker but also engineer and musician Kevin Bivona. 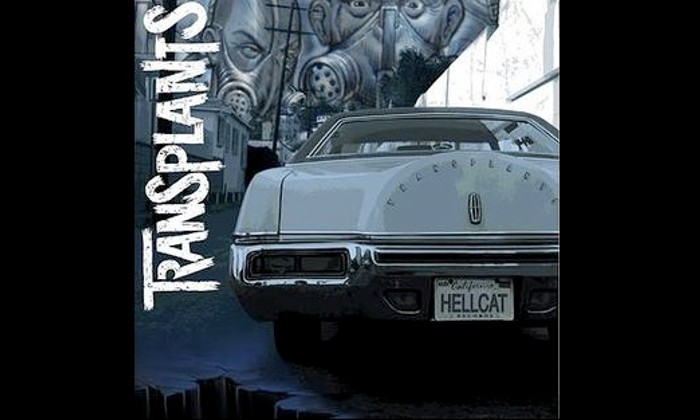 Whilst Transplants was originally conceived by Rancid mainstay Armstrong, and whilst in it's infancy he played many parts, he was, as the project grew, more than happy to delegate roles to a whole host of artists that would enhance Transplants first full length record. Listing the contributing talent on the eponymous Transplants record some 19 years later sounds like a list of who's who of American Punk.

Besides enlisting the help of fellow Rancid band members Matt Freeman and Lars Frederiksen, Tim Armstrong also employed co-producer Dave Carlock. Carlock not only delivered in his role as co-producer but also in his role as musician, and latterly as a member of Transplants touring band. Whilst Freeman is only credited with playing bass on Tall Cans In The Air and Frederiksen backing vocals on the anthemic We Trusted You, Carlock is credited with the guitar and bass on D.R.E.A.M.(Drugs Rule Everything Around Me), synthesizer on all but four of the twelve tracks and most importantly, piano on Diamonds And Guns.

Diamonds And Guns was the lead single from Transplants debut album and is it's defining track. The revolving piano and steam train percussion set the song apart from almost all others on the album. It's a classic piece of Pop-Punk and a mini masterpiece in it's own right. The infectious energy and compelling beat make for a sublime combination. The hooks in Diamonds And Guns are simply irresistible, one of the many reasons why it was picked up relatively quickly by the ad execs of the day. The song is co-written by Armstrong, Aston, Barker and Funkdoobiest's Jason 'Son Doobie' Vasquez. The Hip-Hop flavoured Pop-Punk song delivered the band chart success in 2003, peaking at number 27 on the U.K Singles Chart and number 19 on Billboard's Alternative Songs Chart.

Other significant contributions to the sound of Transplants debut album were delivered by The Slackers Victor Ruggiero who played keys on six of the twelve songs, most notably combining the use of both piano and Hammond Organ on We Trusted You and Armstrong's then wife Brody Dalle. Dalle provided  vocals on Tall Cans In The Air as well as "their song" (Brody and Tim's), Weigh On My Mind.

The album's second single, and second MTV hit, was less of a collaborative affair and drew simply on the combined talents of the original band. D.J. D.J. saw Armstrong and Aston on vocal duties whilst Carlock provided backing vocals and synth with Barker holding the beat steady at the back. The intermittently furious vocal delivery sits atop a riot of sound, carefully harnessed into a scuzzy but harmonic soundtrack which veers from intense to infectious with consummate ease.

Transplants debut album from 2002 opened with fury and pent-up aggression as the aural onslaught of the unforgiving Romper Stomper wraps itself around your ears but it was closed out with a more mellow offering that showed another equally compelling side of the band. The spaghetti western dub reggae infused delights of Down In Oakland sign off a thoroughly enjoyable album with a loosely constructed but ultimately satisfying finale.