A Grower: An album that gets better with time. Usually, you need to listen to it a few times to fully appreciate it. New Look are a Canadian duo consisting of vocalist Sarah Ruba and keyboardist/producer Adam Pavao. Their self-titled debut is awash with swaying synths and lush vocals. A vague classification under the post dub-step genre is probably the most accurate description of the off kilter beats and synthesized bass lines. 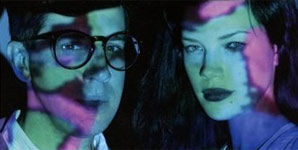 Opening track 'Nap on the Bow' opens with a minimalistic drumbeat and a sparkling bass line before synth chords gently echo over Ruba's dream like vocals. Second track 'Relax Your Mind' is reminiscent of much of the xx's material - who, incidentally, New Look supported on tour - with a simple yet effective bass line and odd effects flying in and out of the mix. Their music is something you can lose yourself in and gently slip into a lighter, carefree state of mind. The fifth and stand out track 'The Ballad' marks the mid- point of the album. Wavering chords act as a consistent feature, giving the track its structure whilst electronic percussion changes slightly every now and again to great effect. The 80's inspired analogue synths combine perfectly with the produced beats and enchanting vocals, resulting in a mix of electronica, indie pop and sometimes a subtle hint at R & B. Although the husband and wife duo have discovered something special in New Look, you can't help but feel there is too much of the same thing within the ten tracks. Everything begins to blend in to an intensely chilled but confusing compilation of bright synths and delicate, female vocals, which can become slightly frustrating and often overwhelming. So as soon as the album has grown on you sufficiently, the repetitiveness becomes a weakness that is hard to ignore.

A blissful experience and perfect for drifting off to or losing yourself in late night at night. Whatever your use may be, New Look provide - amid the immaculate production - an elegant sound that is undeniably relaxing but perhaps too much of a good thing would be an appropriate phrase to use here?