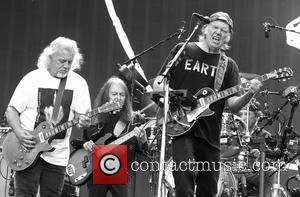 Veteran rocker Neil Young has ruled out plans to ever reunite and tour with former bandmates David Crosby, Stephen Stills and Graham Nash.

The Like a Hurricane hitmaker made the bold declaration during a show in Philadelphia, Pennsylvania last week (ends10Oct14), when he was asked by a fan about a possible Crosby, Stills, Nash & Young comeback in the near future.

Responding bluntly, he said, "Csny will never tour again, ever... but I love Stephen Stills."

Young's comments emerge a year after he teamed up with Crosby, Nash and Stills onstage for the first time in seven years to perform at his annual Bridge School Benefit in California, but it's clear he is no longer interested in catching up with his old pals - and Crosby admits it's no surprise.

Addressing Young's remarks on Twitter.com on Friday (10Oct14), Crosby wrote, "I hear Neil said 'there will never be any more Csny shows' that's like saying there are mountains in Tibet we know Neil... we already knew."

And it appears Crosby is the cause of Young's feelings.

Replying to a fan's query, Crosby revealed, "He is very angry with me...", before backing up Young's statement by adding, "believe me... not going to happen".

Crosby has yet to elaborate on what caused the fall out between himself and Young.