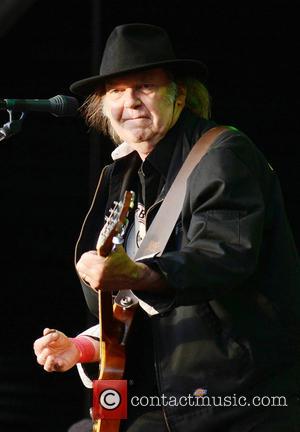 Neil Young reunited onstage with David Crosby, Graham Nash and Stephen Stills for the first time in seven years at his annual Bridge School Benefit in California on Saturday (26Oct13).

Crosby, Stills, Nash and Young were among the highlights of the star-studded benefit, which also included performances from Arcade Fire, Jack Johnson, Queens of the Stone Age, Heart, Elvis Costello and his wife Diana Krall, My Morning Jacket and fun.

Young opened the show by performing a rendition of Bob Dylan's Blowin' In The Wind before breaking into acoustic versions of Heart Of Gold and Comes A Time, which he sang with his wife Pegi.

The Canadian band was added as a last-minute replacement for The Killers, who pulled out of the benefit earlier this month (Oct13).

Frontman Win Butler told the audience at the Bridge School gig, "Neil emailed us a few days ago. They needed a pinch hitter, so we looked at our schedule. There's nowhere else on earth we'd rather be."

Young joined the band onstage for a new track they introduced as "I Dreamed A Neil Young Song".

Csny took the stage just before midnight and kicked off their hour-long reunion set with Just A Song Before I Go.

The first night of the 2013 Bridge School Benefit weekend shows ended with an all-star rendition of Teach Your Children.