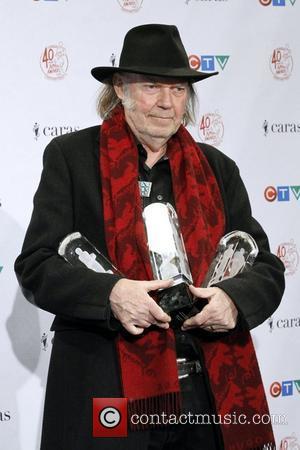 Neil Young's classic rock band Buffalo Springfield are to tour for the first time since 1968.
The supergroup, featuring Young, Stephen Stills and Richie Furay, reunited to perform at the rock star's annual Bridge School Benefit concert in Northern California last October (11) - and now the band is hitting the road.
Young has announced a six-date California tour in June (11), which will serve as a warm-up for the band's set at the Bonnaroo festival in Tennessee on 11 June (11).
Young's longtime bassist Rick Rosas will take the place of the late Bruce Palmer on the road and drummer Dewey Martin's spot will be filled by Crosby, Stills and Nash drummer Joe Vitale.
A statement from Furay reads, "It's hard to believe 42 years have passed since we played together as the Buffalo Springfield. Over the years, music never stopped flowing from each of us, and it's come full circle, if you will. And now, we get to share our hearts with you again."