Music legend Neil Diamond has got engaged to his manager Katie McNeil, who will become his third wife. 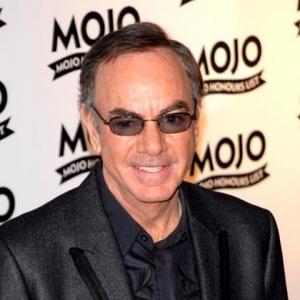 Neil Diamond has got engaged to his manager.

The 70-year-old singer has announced his happy news on twitter and admitted he is completely "love-struck".

Writing in a rhyming couplet to resemble a song lyric, he tweeted: "Good news coming from sunny LA/ and you're the first I want to tell/ Katie & I just got engaged/ and I hope you wish us well. Neil."

He later posted a photo of his future wife - who was executive producer on the 2009 documentary about him, entitled 'Neil Diamond: Hot August Night NYC' - and wrote on twitter: "I'd like you to meet Katie. I'm love-struck. I took this photo in London last month. Neil."

The 'Sweet Caroline' hitmaker has another reason to celebrate after it was announced yesterday (07.09.11) he will be recognised for his contribution to US culture at the Kennedy Center honours in December.

Neil - who has two daughters, Marjorie and Elyn, from his first marriage to Jayne Posner and two sons, Jesse and Micah, with ex-wife Marcia Murphy - explained he was "flying way above sea level" after hearing the news, revealing he has "dreamed" about achieving such an honour.

He said: "I've watched, and I've seen, and I've even dreamed that someday that would happen to me, but I never really believed that it would."

He will be honoured alongside Oscar-winning actress Meryl Streep, cellist Yo-yo Ma, Broadway star Barbara Cook and saxophonist Sonny Rollins at the John F. Kennedy Center for the Performing Arts in Washington.