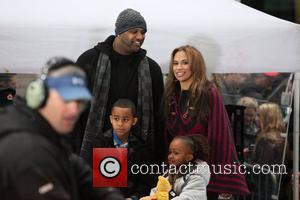 They say never work with children or animals and Kyle Dyer will probably be paying heed to the advice after she was bitten by an Argentine Mastiff called Max on her NBC show, live on air. Max was featured on the show because he had been rescued by firefighters the day before, when he had got himself trapped in a frozen pond and could not get out.

During the segment, Kyle was shown petting Max and expressed how happy she was to have him on the show. She also spoke to the two firefighters about the incident that had happened the day before. Max appeared at ease throughout the interview but at the end, Kyle lent down and put her face close to Max's. It looked as though she wanted to kiss the dog but what happened instead was that he reacted badly to her moving towards him and lashed out. According to The Daily Mail, he bit her and "got some of her lip."

Dyer reportedly underwent reconstructive surgery yesterday (Wednesday) and a trauma team is "evaluating the injuries to her face." The dog had not had proper rabies vaccinations, so his owner, Mr Johnson was fined, in addition to a fine for not being on a leash. Kyle is expected to be back at the station within a few weeks and is said to be recovering well.