Ignoring everything that made the 1982 ghost-horror classic so iconic, this remake merely feels like yet another Insidious movie, using the same bag of tricks to try to frighten the audience. It's very well made, and the story still sends chills down the spine, but without even a hint of originality the film never develops any real suspense, relying instead on cheap tricks to cause the audience to jump at things that aren't actually scary. 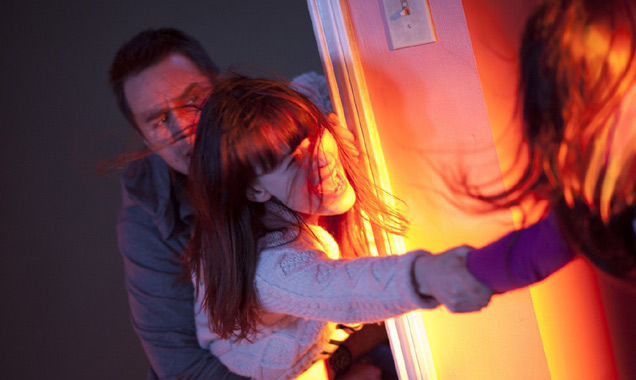 The story opens as the recently laid-off Steve (Sam Rockwell) moves his family into a cheaper home in a dodgy part of town next to some buzzing high-power lines. His wife (Rosemarie DeWitt) is determined to make the best of it, while their teen daughter Kendra (Saxon Sharbino) moans about having to move, their nervous preteen son Griffin (T.S. Spivet's Kyle Catlett) is afraid of every new sound, and 6-year-old daughter Maddy (Kennedi Clements) discovers some new imaginary friends. As strange things start happening in the house, Maddy disappears on a stormy night. So Steve hires paranormal expert Brooke (Jane Adams) to rescue her from what is clearly an angry spirit. And when the nastiness escalates, Brooke calls in reality TV ghostbuster Carrigan Burke (Jared Harris).

What made the original version so memorable was the way Steven Spielberg and Tobe Hooper reinvented the haunted-house genre, finding new ways to scare us silly. This remake's director is Gil Kenan, who so ingeniously terrified audiences with his animated Monster House but allows this movie to look like pretty much every other horror out there at the moment. It's all so familiar that we brace ourselves for each loud blare of noise. Each set-piece has a rather bland sheen about it, playing so predictably to the most obvious fear factor that nothing catches us by surprise.

By Keith Breese
Weak
I suppose, if anything, the fact that there is a new vampire flick out every month suggests that vampires -- in their black leather incarnation -- have become cinema mainstays. It's like Christmas music in November, just part and parcel of the great American experience.

Sure, the vampire myth has been with us forever. One of the very first films was a vampire movie. We are indeed obsessed with these blood-sucking trollops. And yet, lately, the vampire film has fallen into a rut that I worry it can never pry itself out of. We don't see the vampires of yesteryear anymore. Gone are green skinned, hairy-eared ghouls that haunted graveyards and sucked the blood from corpulent women. Gone are the baby-bird-headed stick figures that lurked in foggy London alleyways. Today vampires are all glamorous, leather-bound martial arts experts. They have great hair (that's a side-effect of living forever), nice shoes, and groove to industrial music. They are the Goth fashionistas who are as infatuated with sucking blood as they with collecting Ferraris and having swanky parties.