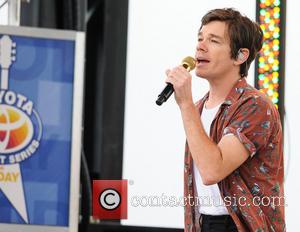 Picture: Nate Ruess and fun. - fun. kickoff the Toyota Concert Series on a special edition of NBC's 'Today' live at Seaside Heights for the reopening...

The fun. frontman met the Brit through her twin sister, DJ Samantha Ronson, and the new couple has been secretly dating for months, according to Us Weekly.

Ruess and Ronson made their first public appearance together on Saturday (19Jul14) at an event in Montauk, New York, and an insider tells the magazine the Some Nights singer was "very incognito and didn't want to pose for photos but stood close and held Charlotte's dog Oliver... it's been super hush!"

Another source adds, "They were introduced a while ago and have met a few times but it recently turned romantic. They have quite a few mutual friends actually. It's cute."