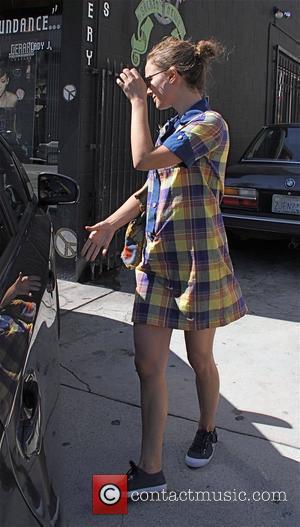 Natalie Portman shares an on-screen kiss with the actress Mila Kunis in Darren Aronofsky'S much anticipated new film Black Swan. OSCAR nominated Portman - whose recent roles have seen her star in Brothers, and The Other Boleyn Girl - plays the part of a New York ballerina in the psychological thriller set for release on December 1st 2010. Her character forms a rivalry with fellow ballerina Lily, played by Kunis, as the competition for parts in Tchaikovsky's ballet Swan Lake heats up. However, the pair form an unlikely friendship and during one scene in the movie, they share a passionate kiss.
Also featuring in Aronofsky's film - his first since Golden Globe winning The Wrestler - is Barbara Hershey, who plays a retired ballerina, and Vincent Cassel, playing an artistic director.
Portman was nominated for numerous awards for her performance in 2004's Closer, and last year she told USA Today of her need to keep playing demanding roles, she said, "I'm trying to find roles that demand more adulthood from me because you can get stuck in a very awful cute cycle as a woman in film, especially being such a small person".
Black Swan debuts at the 2010 Venice Film Festival.