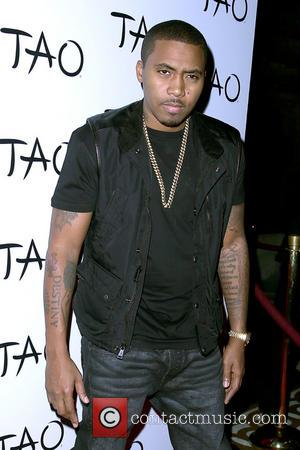 Picture: Nas TAO Kicks Off New Year's Eve Weekend with a special appearance by Nas at TAO Nightclub at The Venetian Resort and Casino Las Vegas...

Rapper Nas is the latest celebrity to speak out in defence of Quentin Tarantino's controversial new film Django Unchained, speaking to press at the unveiling of his new collaboration with cognac makers Hennessy.

The famed rapper, who had his own brush with civil rights campaigners when he announced in 2007 that he was to name his upcoming ninth album after the infamous 'N word,' said that he has indeed been to see the Jamie Foxx-starring film, but he couldn't understand what all the fuss was about (he eventually named his 2008 album Untitled). He went on to explain that given Tarantino's history in film-making, peple should hardly be surprised with his gratuitous use of language and gore and that, in fact, the movie fits in well with the context of the Spagetti Western era anyway. He said: "It's a movie, movies by [Tarantino], why should we be surprised if the movie is raw?"

"He's one of the greatest filmmakers of our generation, and we don't go there to see anything less than rawness," Nas went on the say before adding, "He's an artist, and artists have to express themselves."

Tarantino himself has, unsurprisingly, had to battle off criticism for his film, as he so often has to, whenever he brings something new out. Recently he spoke to MTV News about his use of the 'N word' in the movie, arguing: "I think it's kind of ridiculous, because no one can actually say with a straight face that we use the word more than it was used in 1858 in Mississippi. So since they can't say that, what they're basically [saying] is I should lie. I should pretty it up. I should lie, and I don't lie when it comes to my characters and the stories I tell."

Django Unchained is in cinemas now.