Naomi Watts 'starves' herself before event

Naomi Watts admitted at the Oscar Awards on Sunday that she usually starves herself before a big event and ends up being really hungry. 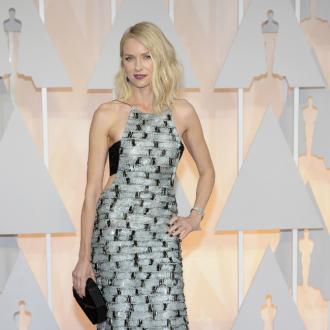 Naomi Watts usually ''starves'' herself before an awards show.

The 46-year-old actress admitted on the red carpet at the Oscar Awards in Los Angeles on Sunday night (22.02.15) that she's usually hungry when she turns up at events because she's doesn't like to gorge on too much grub before a big Hollywood ceremony.

Speaking to E! host Ryan Seacrest, she said: ''I'm hungry on days like today, usually you've been starving yourself... ''

The 'Diana' star showed off her slender frame in an unusual floor-length dress, which featured a bizarre block monochrome patterning and halter-neck spaghetti straps.

The blonde beauty flaunted plenty of skin with an extremely low cut-out back but protected her modesty with a black sparkly bandeau underneath.

She teamed the gown with a black clutch bag but added a splash of glitz with a diamond bracelet and black dangle earrings.

The British stunner kept her make-up fairly simple but drew attention to her mouth with a dark rouge lip, while her long blonde bob was styled in simple, delicate, waves that effortlessly shaped her face and exposed her defined jaw line.