Naomi Campbell thanks her mum for her ''good genes'', which have helped the supermodel to maintain her youthful good looks. 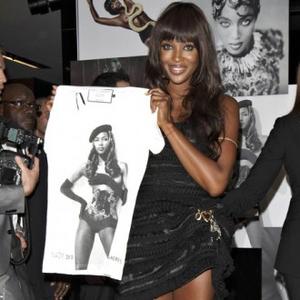 Naomi Campbell thanks her mum for her good genes.

The British supermodel - who was discovered by a model scout at the age of 15 - admitted while she doesn't worry about her age, she avoids drinking alcohol and eats healthily in order to maintain her youthful looks.

She said: "I've got my mum and her good genes! I don't worry about my age, on the contrary, I like telling people I'm 40. When you worry too much, you will show these worries. I try to avoid that. I eat healthily, I don't drink - not as a matter of principle, but because it's not good for me."

The 40-year-old beauty also expressed her disappointment that while The Fashion industry has changed during the 25 years she has spent in the business, she still thinks black models have to give 110 per cent to succeed on the catwalk.

Naomi added to Germany's Welt am Sonntag newspaper: "The lack of black Women at fashion shows in Paris makes me really sad, because I thought it would get better. I didn't work 25 years for black women to be ignored.

"I don't want to appear pessimistic though, that doesn't suit me. However, it means as a black woman you have to prove yourself even more. You have to give 110 percent. I was brought up to do so anyway, though. I still have that drive and enthusiasm."