Naomi Campbell has confirmed she is in negotiations to design her debut fashion line. 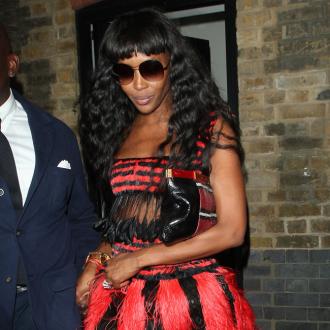 Naomi Campbell is in talks to create her own clothing range.

The supermodel has revealed she is due to follow in her close friend Kate Moss' footsteps by branching out into fashion design.

She confirmed to the MailOnline: ''I've been approached by a few brands to design a line for them, it's something that interests me and I'm in negotiations. So I'll be sure to let you know as soon as I have an announcement to make... watch this space!''

The 44-year-old star is considering developing her own lines of accessories, lingerie and swimwear as well as womenswear.

And Naomi hinted some of her fellow 90s supermodels' successful fashion collaborations could have inspired her big move as she stepped out in a Kate Moss for Topshop dress.

She added: ''I'm always so proud of my friends who develop great lines in fashion. I'm genuinely happy to wear the clothes they create.''

'The Face' mentor revealed earlier this year she was hoping to share her fashion vision with the world.

She said: ''I always had this feeling of, I love working with designers - I don't want to be their competition, and maybe if I do my own line they won't work with me anymore.

''I see there's lots of things that are not there that I feel that I'd like to have, and so I'd like to share it with everybody. So yes, I will, and hopefully one of the things will be out by 2015.''