Naomi Campbell and boyfriend Vladislav Doronin are set to wed after celebrating their ''little secret'' with a Â£50,000 fireworks display on the Greek island of Crete 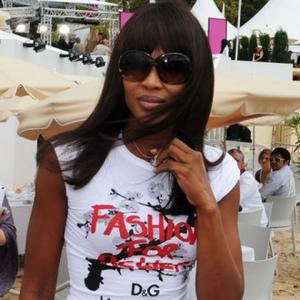 The British model and her long-term boyfriend, Russian billionaire Vladislav Doronin let off Â£50,000 of fireworks while on holiday in Greece and "hinted" they were now set to wed.

A guest at the Elounda Beach hotel in Crete, where the couple moored their boat, said: "Naomi and her boyfriend set of Â£50,000 worth of fireworks over a 20 minute period.

"She was brimming with excitement and hinted they were engaged. She was telling guests it was time to celebrate 'their little secret'. Naomi had the most incredible ring on. Everyone was commenting on how genuinely excited she seemed."

Fellow holidaymakers also got to enjoy the display in the Mediterranean Sea, with the guest adding it was the most amazing they had ever seen.

The visitor told the Daily Star newspaper: "She said they were celebrating something that would send their message to the stars with a spectacular display of fireworks.

"People came out of the hotels all around the bay and up the mountain to watch. It was the most incredible display I've ever seen."

The 41-year-old beauty has previously professed a love of strong men, admitted she is attracted to people who know their own minds.