Naomi Campbell is ''delighted'' with the support she has received ahead of her Fashion For Relief show in London and thanked her close friends Gaston and Kathrin Glock for their seven figure donation. 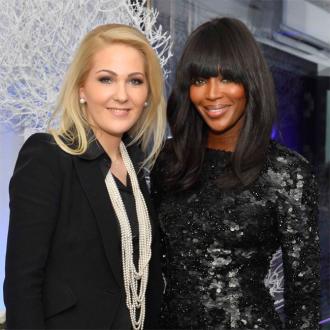 Naomi Campbell is ''delighted'' with the support she has received ahead of her Fashion For Relief show.

The 44-year-old supermodel will take to the catwalk today (19.02.15) to kick of London Fashion Week at Somerset House in the hope of raising millions of pounds for the fight against Ebola.

The raven-haired beauty - who also walked in her Fashion For Relief show during New York Fashion Week on Saturday (14.02.15) - is thrilled with the support she has received for the cause so far and thanked her loyal friends Gaston and Kathrin Glock, who have already donated a seven-figure sum, for sponsoring the fundraiser.

Naomi - who has a home at the heart of the outbreak in Kenya - said: ''I am delighted to be at the forefront of a campaign which is helping raise awareness about the Ebola virus around the world.

''Thousands of families and villages have been decimated by this dreadful disease and we must do everything to treat and stop it spreading anymore in the future.

''I'd also like to thank my close friends Gaston and Kathrin Glock for their very generous sponsorship and continued support.''

Naomi is hoping the show - which will reportedly feature a host of her fashionista friends including Kate Moss, Diane Von Furstenberg, Margherita Missoni and Daphne Guinness in designs donated by Dolce & Gabbana, Givenchy, Alexander McQueen, Stella McCartney, Vivienne Westwood, Balmain and Versace - will raise enough money to build a new hospital to treat Ebola victims in the Sierra Leone.

She told BANG Showbiz: ''Our major aim is to build a brand new hospital in Sierra Leone to help in the treatment of this virus and all the wonderful doctors and nurses who are working so hard in very difficult conditions.''

The fashion icon insists the production will have a more fun, upbeat vibe than traditional catwalk shows.

She said: ''Everyone is there because they want to be there. So everyone shows up on time and backstage there's a really good vibe. It's a lot of fun, it's a big party backstage because people haven't seen each other for a while, you know it's just a good energy.''