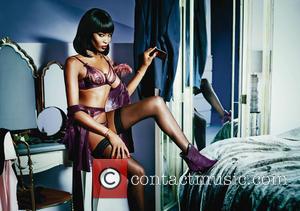 Picture: British supermodel Naomi Campbell has been announced as the new face of Agent Provocateur and features in the brand's spring/summer 2015 campaign, shot by Ellen...

Supermodel Naomi Campbell narrowly made it to a live taping of U.S. daytime show The Talk on Tuesday (06Jan15) after running behind schedule.

The British fashion icon had been booked to promote her role in filmmaker Lee Daniels' new Tv drama Empire, but she hadn't even left her hotel when cameras began to roll on the daily talk show, which features Sharon Osbourne and actresses Sara Gilbert and Aisha Tyler among the presenters.

Co-host Julie Chen shared the news with the Los Angeles studio audience at the top of the programme, revealing, "I've been told that our lead guest, Naomi Campbell, is not even in the car yet on her way here..."

The model was en route 10 minutes later, but Chen mused, "It's not like she's around the corner, she's at least 25 minutes away, and that's if traffic is flowing, so we'll see if she makes it (to the show in time) or not."

The supermodel was rushed onstage in the final minutes of the hour-long broadcast to cheers from the audience, and explained, "It was tough (to make it on time), it was really close. It was, like, in the car, in a robe and sneakers, doing make-up."

The British star then raced through the premise of her role on Empire before the taping wrapped.