Nada Surf - When I Was Young Video

Nada Surf's new single, When I Was Young, is taken from their critically acclaimed seventh studio album, The Stars Are Indifferent To Astronomy. The band will be playing two UK dates in February 2012.

The video for When I Was Young sees a day in the life of a young schoolboy cutting school to explore New York. He runs through streets and clambers up buildings to gaze at the city below.

Nada Surf's lineup has largely remained unchanged since forming in 1992. Matthew Caws (vocals, guitar) and Daniel Lorca (bass) formed the band in 1992, with Aaron Conte on drums. The latter left the band in 1995 and was replaced by former Fuzztones drummer Ira Elliot, who remains with them to this day.

The band signed with record label Elektra in 1996 and in that same year, their song Popular became a huge summer hit. Soon after, Nada Surf broke off their contract with the label, over the quality of their second album The Proximity Effect.

Nada Surf took a forced break in 1999, which lasted for three years. Their third album, Let Go, was a critical success and since then, the band have regularly released albums to positive acclaim. 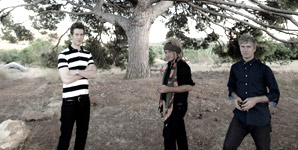 Nada Surf - When I Was Young Video