Kevin Shields has a word or two of advice for those getting over-excited about Mercury Prize nominations.

Kevin Shields, the singer and guitarist with the influential shoegaze band My Bloody Valentine, has accused the Mercury Music Prize of "banning" his band's music from consideration for the award.

Sheilds' band were left off this year's shortlist - announced on Thursday (September 12, 2013) - in favour of a slew of more commercial acts including the Arctic Monkeys, Jake Bugg, Laura Mvula and Rudimental. The move angered the legendary guitarist who claimed his group were being ignored for self-releasing their last album and bypassing Apple, Amazon and the major record deals.

"Isn't Mercury a phone company or something, anyway? What's that got to do with music?" Shields said in an exclusive interview with The Guardian, "We're banned by them, and do you know why? Because we're not on Amazon or iTunes. That's one of the qualifying criteria. You have to have major distribution or be on iTunes or Amazon."

Shields is correct, in that Mercury qualifying albums must have "a digital and physical distribution deal in place in the UK" though many acts have been forced into deals with the major distributors to effectively stay above water.

"We released our record, mbv, independently. It's interesting to learn that to be as independent as we are is...virtually illegal," Shields added, "It's not a real record. Our album's not a real album because it's independent. The corporate-ness has got to such a point where we've essentially been told that we don't exist. So, technically, that album doesn't exist. OK? It's not allowed to exist according to the Mercury prize."

Of course, mbv - My Bloody Valentine's long awaited third album - does exist and is one of the most well received records in recent years, however, what Shields is saying is essentially true. Outside of the true rock press and the band's fans, the record has received little fanfare or promotion.

Shields claims the industry magazine Music Week "never mentioned" the release, adding, "Again, to them we don't exist. Ask anyone if they can find our name in that paper and they won't be able to. We stopped existing once we [self-released] this album."

David Bowie, Foals and Arctic Monkeys are the bookies frontrunners for the 2013 Barclaycard Mercury Music Prize (a clue to the award's commercial agenda is in the name), though Shields considers it a poison chalice anyhow.

"God help" whoever wins, he said, claiming every act who has ever won the Mercury "suffered" in the aftermath. "Even M People," he said, "Seriously. There are sinister forces at work."

Speech Debelle, who found herself cooking pike with Les Dennis on Celebrity Masterchef this month, may agree. 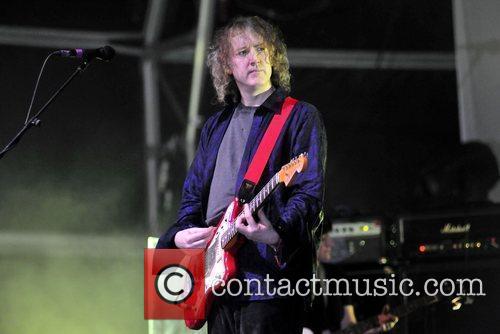 Is Kevin Shields Right About The Mercury Music Prize?

Critics Weak At The Knees For My Bloody Valentine's New Album

My Bloody Valentine Return! Excitement Causes Their Website To Crash

My Bloody Valentine Return With First Album In 12 Years

Earplugs At The Ready: My Bloody Valentine Announce 2013 UK Tour