No other video game developer possesses so many successful franchises as Nintendo. While Mario and his friends from the Mushroom Kingdom are considered to be the true flagship games of the company, the hardcore fans hold another series closest to their hearts. For over twenty years The Legend of Zelda titles have consistently been considered among the greatest games ever made. After well over a year of delays, Link has been given his DS debut in the form of The Legend of Zelda: Phantom Hourglass and if ever a game was worth the wait, this is it. 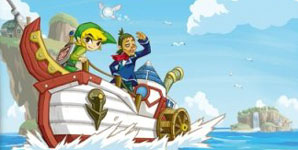 At Nintendo's Spaceworld show in 2001, legendary game designer Shigeru Miyamoto unveiled the first Gamecube Zelda title, the Windwaker. Fans and media alike reacted badly to the cartoon like visuals and childish style of the game. Upon release however the game was unanimously hailed as a huge success and is widely regarded as one of the most stylish and beautiful games ever created. The Legend of Zelda: Phantom Hourglass is the direct sequel to the Windwaker and returns to the cel-shaded graphical style of it's Gamecube predecessor. Never one's to shy away from innovation in their games, Nintendo have found yet another way to upset fans of the series with this new iteration in the form of touch screen controls.

Despite pleas for traditional D-pad control, Eiji Aonuma and his team stuck to their guns and have created the first entirely stylus controlled Zelda. Just as all of those negative cries were silenced when the Windwaker was released so shall all doubters be turned once they see how brilliantly intuitive and innovative this new style of play can be.

The story continues on from where the Windwaker left off. Link and Tetra are sailing across the Great Sea with their merry band of pirates when a mysterious ghost ship appears and Tetra goes missing. After falling overboard, Link wakes up on an unknown island in distant waters and sets out to rescue his friend. This of course involves sailing the seas, visiting many islands, collecting treasures and items, venturing into dungeons, solving puzzles and defeating all manner of foul beasts as you go.

The presentation is second to none. The modest 3D capabilities of the DS are pushed to the maximum to recreate the cel-shaded world of The Great Sea. The framerate is constantly smooth and everything is brought to life with such vibrancy and detail that it hard to know how the development team squeezed it all in to a tiny DS card. This is easily the most beautiful game on Nintendo's handheld. The audio matches the high standards set by the visuals with the familiar mix of Koji Kondo composed Zelda classics and some impressive use of the console's pseudo surround sound features all adding up to give that special "feel" of a Zelda game.

Phantom Hourglass however doesn't feel like any other game in the series and that is down to the new control method. Touching any part of the screen with the stylus will cause Link to run to that spot; touch an enemy and the hero in green will attack; quickly draw a line away from Link to stab or swipe across his path to slash. It's all very simple and intuitive and works incredibly well bringing a new freshness to just about every aspect of the game.

Another staple of the Zelda series are the numerous puzzles Link will encounter. Veterans of the franchise will no doubt feel right at home flicking switches in a particular order and finding hidden keys to progress but just about all the features of the DS are put to brilliant use. It would be unfair of me to spoil any of these classic moments but there are many logic puzzles so clever you can't help but smile at Nintendo's genius. One highly useful feature when it comes to the puzzles in the game is the ability to write notes on the map. Never again will you be scrambling about your bedroom for a scrap of paper to scribble down a clue or hint as you can just put it on your map and then forget about it until needed. So simple, so clever. Surely every DS adventure / RPG will carry this feature from now on.

One criticism given to Link and Tetra's previous adventure on The Great Sea was that the sailing sections could be quite dull and tedious. To make up for this, Phantom Hourglass features a much smaller map, but with a far higher concentration of islands and things to do placed throughout the ocean. Controlling your boat is as simple as tracing your path on the map screen and then Captain Linebeck will take care of the rest, allowing you to concentrate on blasting pirates and other enemies with your cannon and looking for sunken treasure or even stopping for a spot of fishing. Linebeck is a new character to the series and is truly fantastic. Again, I don't want to spoil the plot or any other surprises but suffice to say he's the best scoundrel to captain a ship since Han Solo and I for one hope this isn't his only outing in a Zelda title (seriously, Tingle got his own game for heavens sake).

As well as having several dungeons to find and explore as is the norm in the series, Phantom Hourglass also features one dungeon which must be visited repeatedly in order complete your quest. This is called the Temple of The Ocean King and is made especially tricky as there is a time limit on how long Link can survive within it. Only by uncovering the secrets hidden in the depths of this temple can you progress through the game, which in turn allows you to find more sand for the Phantom Hourglass of the title which then gives you more time to explore this dungeon. It's one of the very few drawbacks of the game as you have to repeatedly retrace your steps through the temple which can become tiresome - although there is the added incentive of trying to beat your quickest time through the level.

The only other negative thing to say of The Legend of Zelda: Phantom Hourglass is that it's over a bit quicker than I'd have liked. With around twenty five hours worth of gameplay it more than stands up against other titles on the DS, but we've been spoiled in the past with Zelda games lasting up to and beyond forty or so hours. There is still lots to see and do after the main quest is over with plenty of mini games and hidden extras, so longevity can only be considered a minor complaint and is perhaps simply a symptom of such an enjoyable experience having come to an end.

The Zelda faithful have been waiting a long time for Phantom Hourglass to arrive but they won't be disappointed with this. It is easily the best handheld Zelda ever and is so close to perfection that it needs to be considered up there with the greatest in the series. It is the most well polished and playable game on the system and every DS owner should experience it. Nintendo probably didn't need another killer app for it's hugely successful dual screen handheld, but it's created the ultimate one regardless.