Worriedaboutsatan are an electronic duo from Manchester, consisting of Gavin Miller and Thomas Ragsdale. They largely go down the ambient avenue of the electronic realm delving in ethereal waves of foggy drones and pulsing, surfacing beats. Last year's 'Blank Space' showed that Worriedaboutsatan can do meditative and enticing with the best of them, being a numb, but therapeutic journey and tonight they hit Leeds' Wharf Chambers to really to you ride you won't forget. 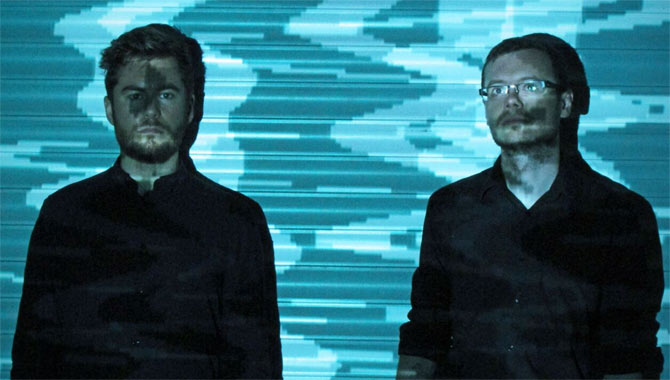 Firstly, though we have Sunset Graves who delivers chilling, patient music in a similar vein to tonight's headliners. The beats take their time, whilst the warm miasma keeps you hooked for when it comes to the payoff of the more cascading moments.

Worriedaboutsatan hit the stage and deliver a set of enticing, hypnotic, possessive electronica. Across the 40 or so minutes they play it both tough and dreamlike fusing dark, hazy soundscapes with firm, chokehold beats which won't let go.

They're aided by a pitch-black room with ever changing lights to make you feel like you're in another realm. That's the key to Worriedaboutsatan's live power, is that they create an atmosphere you get absolutely lost in. During their set, Worriedaboutsatan's sound is so gripping and so relaxing, yet active so that you genuinely feel like you could stay in this zone forever. A lot of the sonic elements provoke a comatose-like state, but the beats keep you swaying and fully awake, into it.

Worriedaboutsatan are victims to their own spell as well as Ragsdale is a sporadic powerhouse in his actions, the way he's constantly flopping all other his vast gear and frantically pushing buttons like he's in a speed-clock game of chess. Miller is equally key, providing post-rock style guitar, playing a minimal amount of notes, but letting them ring out, adding to the ethereal nature. The fact that Worriedaboutsatan, an ambient electronica act, have guitar at all, makes them unique, but the way it doesn't feel out of place, swimming along gracefully with the electronics, really shows the beauty of tearing down genre boundaries. Also, the way Miller and Ragsdale spend the whole set facing opposite each other, so it feels like the organic and the mechanical are dancing together which is effective in a juxtaposing way. Miller even plays it with a cello bow at times adding another bow to their quiver.

They close with their ace song, 'The Woods' which is frankly as good as it gets when it comes to live experiences. This is Worriedaboutsatan's magic formula pushed to the max, with the ambient aspects being at their most warm and spectral whilst accelerating breakbeats are brought to the table. On the one hand, it's utterly meditative and on the other it feels like music to go hard to, but there's enough space and breathing room between both sides that each one can have equal control over you. You feel like you're about to be put to sleep for an operation, which will leave you fully repaired, but at the same time you want to stomp and try find a dingy rave once this show's finished.

Worriedaboutsatan are a one-of-a-kind band and live they're a truly enchanting experience. It's rare that a band can leave you feeling like you've had your spirit repaired and like you want to party, but perhaps that's how Worriedaboutsatan approach their music, knowing that opposite ends of the spectrum can have so much in common. It's an important lesson and whilst this band play, it's a lecture you're not going to want to leave.