Will Stratton - What The Night Said Album Review

Review of What The Night Said Album by Will Stratton

Will Stratton
What The Night Said
Album Review 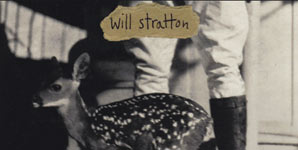 Gorgeous. Simply gorgeous. A debut album from a singer-songwriter from New Jersey, What The Night Said is like a wonderful amalgam of Iron & Wine's lushly plucked guitar and melody, Sufjan Stevens' inventiveness and Josh Ritter's warm voice - and maybe a measure of what Snow Patrol used to have.

It's not all softness and Jose Gonzalez bedsit introspection, though - there is a fair measure of rock edge among the largely acoustic instrumentation. Will Stratton may remain, like Tim Easton, an under-recognised talent, which would be a huge shame - it is hard to imagine that anyone who bought Turin Brakes' second album wouldn't have been better served by this disc. Songs like Katydid, Sonnet, I'd Hate To Leave You and Night Will Come would be highlights of any songwriter's album. The vignettes at the core of each song are rendered perfectly - tales of small things beautifully told. Suggesting that Stratton is an artist to watch would do a huge disservice - this album deserves space on your shelf right now.