Review of Lazers Not Included Album by Wilkinson

Former Best Breakthrough Producer (the D&B Awards got that spot on) Mark Wilkinson has had a pretty fabulous end to a very good year. The London DJ/producer and mixer would seem to be the Drum & Bass go to guy. With the release of his debut album 'Lazers Not Included' he has shown off his formidable talents in a tight package with unapologetically commercial appeal. If you liked the Rudimental album 'Home' I can more or less guarantee you will love this too. 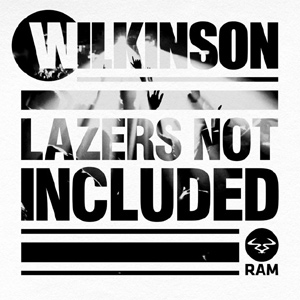 The 12 track set includes five of the eight singles that Wilkinson has released under his own moniker. First up is 'Tonight', from way back in December 2011. Then there's 'Need To Know', one of two tracks on the album to feature Iman, with polished high vocals to compliment the D&B soundtrack accented perfectly by its bongos, acoustic guitar section and continually revolving pan-pipe like keys. From earlier this year, there's 'Take You Higher' with the old school techno treat that's likely to send any rave tent into delirium. 'Heartbeat' was a 'World's Hottest Record' which, upon release, features P Money & Arlissa and is packed full of reverb reverse bass, brutal beats, sirens with an attack and attitude to rip up any dance floor. P Money is wound up tight throughout whilst Arlissa provides a wonderfully contrived feminine foil to offset the darkness. The song also contains my favourite line from the album: 'I can feel it pushing up my heartbeat, in and out of consciousness, reclining like a car seat'. And then you have 'Afterglow' - his latest, and most successful, single to date and a great video too if you haven't yet seen it.  Introduced by a lovely laid back piano and a more subtle mix of D&B beats, the song features previous 'The Voice' semi-finalist Becky Hill. Becky gives a very credible, ever so slightly damaged (in a 40-a-day, lived in, smoky, soulful, 'good' way you understand) vocal. It's more than just John Newman in a dress.

The album isn't just about the five singles though. 'Heatwave' with rapper Kay Flay has some great hip-hop overtones and a dirtiness inherent in the subterranean mix. Both 'Too Close' (the next single) and 'Let Me Be Free' lighten things up with the help of dubsteppers Detour City; the high vocals, horns and a supersonic beat of the former working well to break up the more abrasive and aggressive tracks.

Wilkinson has done a great job with 'Lazers Not Included'; it has all the ingredients that make a very enjoyable album. He has shown real flair in his ability to produce D&B and is not afraid to appeal to a more mainstream audience. He has the floor filling capability of Martin Garrix, all the tricks and nous of Pendulum and the credibility of LTJ Bukem. D&B has never looked so healthy.