Review of Girls vs Boys Single by Wilder

Bristol four piece Wilder look likely contenders to rejuvenate a flagging music scene in the one time epicentre of trip-hop cool. With a musical heritage centred around big players like Massive Attack, Tricky and Portishead, Bristol has played a significant part in recent musical creativity and inspiration. Can Wilder kick start it all again?

The band, named after the Austrian born Jewish-American film legend of Some Like It Hot fame, Billy Wilder, not the offices of Bristol Traffic Management team at Wilder House, Wilder Street are a guitar, synth, bass and drum combo who have previously played support to Julian Casablanca's. Their sound has been compared with that of Roxy Music as well as The Gossip. Girls vs Boys is their debut offering on Rough Trade Records.

Wilder have previously been heard in session for Huw Stephen's, and most recently requisitioned a house boat in their home city to party the night away, as a launch for their new single, and by way of exposure for the forthcoming album release. The 300 fans and friends lapped up the bands infectious energy as they tore up the dance floor to the single Girls vs Boys. 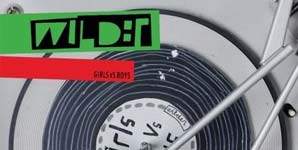 The single, backed by TBT, is a slightly frustrating conundrum of styles. Rather like Soweto sampling Vampire Weekend give an intelligent New York spin to some quirky British ideas, Americanise them and make them sound new and fresh, Wilder have tried to take that American infusion back to Britain and make it sound 'English' again. For me the lead track never quite works because of that. The back and forth fusion somehow manages to dilute the essence of the sound so much it no longer has resonance. The tune is geared for air play with its Pulp esc synth note entry through to its bubbly bass line and tambourine. By no way a bad track, Girls vs Boys, with a nod to its Brit Pop forebears, is an odd choice given the quality of TBT.

The second of the 2 track release is right on the money. It's amusing, slightly camp and ludicrously catchy. Marilyn Manson meets Mika at the indie disco to do a Toyah cover is the best way to describe TBT. (It's A Mystery is lurking in there somewhere, believe me!) The toe tappin' stompin' beat and over blown synth chords will have you loving the South West Kitsch of Wilder.

Out on the 26th July, Girls vs Boys is worth a listen, but in a true 50's or 60's flash back to an age where the DJ could make or break you and where they could flip the disc and make the B-Side the star attraction, TBT is worth the download.