Weather - Calling Up My Bad Side Album Review

Review of Calling Up My Bad Side Album by Weather

Weather
Calling Up My Bad Side
Cake Records
Album Review 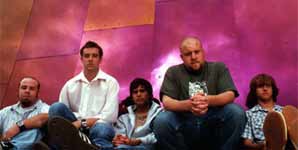 Weather originated in Salt Lake City, but upon relocating to record their debut album they were knocked back by the decision of their bassist to quit. With 40 songs written already, some would see this delay as a blow, but perhaps it was actually a blessing in disguise. The members of the band discovered The Cure, and such was the impression that was upon them, they canned their old material and started their debut album from scratch.

"All This Time" opens the record in impressive fashion; beginning on a gentle acoustic strum it patiently builds to epic proportions, matched by the grand vocals of Sean Campbell. It's a convincing release of anger and sadness, themes that are apparent throughout "Calling Up My Bad Side". The title track itself is somewhat quirkier, and enthused with bouncy vigour – and quite the opposite of "Torn Man Down", which builds upon a hypnotising bass line with a glowing piano melody. Detrimentally, "Falling Down" lowers the tempo, and takes on a similar tone to Snow Patrol's "Run". It lacks the huge chorus, and fails to be interesting for its duration of five-and-a-half minutes.

As if the band have run out of ideas, "Lie To Me" passes without making an impression, but Weather shine again (ho ho ho) with "The Bitter End", which features a shimmering finale that sweetly combines piano and guitar. "Over You" is touchingly melancholic due to the performance of Campbell, before the band inject some energetic funk-rock with "Short & Sweet". The record concludes with "1-80", a glorious slow-burning tale of not-knowing-what-you-want that patiently builds to a crescendo. Bright days are ahead for the Weather-men.