Review of Weapons Album by Weapons 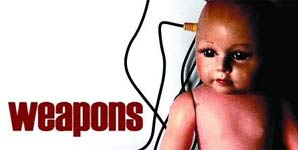 This is a punky, sexy romp, with initial echoes of grunge, and 1970s CBGBs proto punk, leading into nu-metal-esque weirdness. There is energy in spades, proficiency in the playing, and quirkiness that one hopes could take them far. Although perhaps a little tasteless if thrust into today's climate, tracks such as "Terrorist Youth" really stand out, as does "Each Man Kills What He Loves the Most", which leans towards the rap rock territory made so popular by Linkin Parc.

As an album, there is perhaps a little confusion though, and a lack of overall cohesiveness. You're never really sure from one moment to the next what will happen, and the genre game is hard to play. Not actually a bad thing in terms of musical integrity, but perhaps significant in a commercial sense.