Review of Pinata Album by Volcano

Since forming in 2003, Chicago based band Volcano! have released two albums: 2005's 'Beautiful Seizure' and 2008's 'Paperwork' as well as a couple of singles along the way. After first 'Striving for maximum intensity..and unpredictable structures' and then 'Grafting a protective rhythmic exoskeleton around the wild muscles of their incubating monster', Volcano! are now aiming to make you dance by introducing 'Sub-bass, authoritative beats and ecstasy drops'. With 'Pinata' being allowed to 'Flee the comfortable home and live on the streets', Volcano! find themselves 'empty nesters'. (Sounds interesting? Intriguing? Pretentious? Or just Irrelevant until you hear the album?) 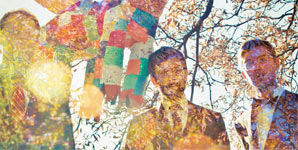 Pinata is a 9 track collection of songs by Volcano! trio Mark Cartwright (Synth, Bass), Sam Scranton (Drums) and Aaron With (Guitar, Vocals). The title track begins the album with a heavy dose of cavernous bass, erratic rhythms and some odd and often ill-fitting instrumentation. (Just because you've been labelled experimental doesn't mean you have to throw the kitchen sink in to every mix and play like you're some sort of free form jazz wizard). The 3 year old single 'So Many Lemons' follows on with more frantically voiced musings before Aaron's vocal seems to become even more shrill on 'Child Star'. The distant inflections of The RHCP's and Vampire Weekend can just about be heard among the frenzy but the song is lost in the confusion of it all...'Born of an aging sun, Watch me rise on the horizon to become, A musical prodigy and a fencing champion.'

'Platebreaker', 'Supply And Demand' and 'St Mary Of Nazareth' are played out in a similar format with frenzied vocals competing with manic instrumentation. Each component seems to battle it out for ultimate domination of each song rather than combining with each other to produce at least one pleasant result. Volcano's Radiohead take on the finale to Platebreaker almost works within its own mania but is too overblown to be enjoyable. The musicianship may be marvellous, but unfortunately, that doesn't necessarily mean the songs are.

Where Pinata works slightly better is on the more uncharacteristic (For Volcano!) tracks on the album. The brief haunting instrumental of 'Danceman' and the less hyper tune 'Fighter' are promising forays into what could have been. On 'Fighter', the need for the vocalist to squeal has, for the most part, been suppressed and the tune is all the more pleasurable because of it. Couple this with its classically composed guitar passage towards the end and, hey presto, we finally have a song that you'd want to hear again. 'Long Gone' concludes the 9 tracks with more sub-bass booms, a lighter instrumental touch and an almost happy and upbeat, harmonising Aaron.

Fine musicians may make albums that other fine musicians appreciate because of their complexity. Pinata by Volcano! may just be such an album. Unfortunately, as far as being an enjoyable listening experience is concerned, it falls well short.