Review of Paperwork Album by Volcano 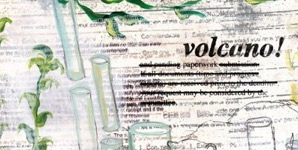 Cast your minds back to the winter of 2006 and Chicago's volcano! launched themselves head first onto an unsuspecting music scene with their 'Beautiful Seizure' long player, a record that it would be fair to say sounded like nothing that had come before it and divided critics forthwith.

As someone who was firmly ensconced in the "meh" corner upon 'Beautiful Seizure''s release; after all, there's many a reason why no one has made certain kinds of abstract noise under the guise of music before now - the fact that it's largely unlistenable being the most obvious - having listened to that record on several occasions since, not to mention comparing it with some of the artists who've trailed in its wake seemingly influenced by its nonchalant devotion to all things freeform and unstructured, 'Beautiful Seizure' has grown on me somewhat to the point where its undisputed highlight 'Apple Or A Gun' has become a staple on this scribe's iPod shuffle playlist. Nothing too drastic about that you may be thinking, but if someone had said that to me two years I'd have probably fallen over in fits of laughter, after tearing a strip off them about the concepts of "music" and "tune" beforehand.

However, subsequent sales of said debut album seemed to support the doubters and volcano! seemed to have disappeared almost as immediately as they'd arrived, without so much as a murmur or thank you and goodnight.

Of course we should have known better that their retreat back to their home base would be the end of their creativity, and thankfully, the financially-imposed (or lack of.) hiatus between 'Beautiful Seizure' and now has been worth the while if the fruits bore on 'Paperwork' are anything to go by.

Whilst still an anomaly in terms of what volcano! actually stand for in the complex musical arena of genre suitability, 'Paperwork' is an amalgam of ideas and semi-structures that at least works around the basic concept of constructing a handful of songs, something which its predecessor by-and-large failed to achieve.

Sure, there's still the complex arrangements to get by - opener 'Performance Evaluation Shuffle' in particular is hard-going to begin with - but persevere and eventually this record's undoubted qualities shine through. 'Slow Jam' is an evolutionary psychedelic journey not too dissimilar to the Butthole Surfers more light-hearted ventures in experimentalism while 'Palimpsests' takes the word "epic" through a white knuckle ride of discordant time signatures and obtuse noodles that only Battles or Youthmovies can pull off with a straight face up until now.

Sometimes volcano! have a tendency to disappear up their own rectal passages - 'Africa Just Wants To Have Fun' is six minutes of elongated pretentious guff that's impossible to forgive - but on the whole, 'Paperwork' is an impressive follow-up that suggests this Chicago three-piece may yet have more aces up their sleeves given time.