Review of Get Yr Blood Sucked Out Album by Viva Voce 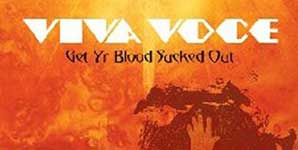 Male-female duos seem to be getting more popular, and that's no bad thing, if Viva Voce (which means 'word of mouth') are anything to go by. From Muscle Shoals, Alabama, via Portland, husband and wife Kevin and Anita Robinson take a spin through everything from blissed-out psych fuzz (hear echoes of Sonic Youth) to R&B and Bangles-like pop, staying healthily away from White Stripes-like blues. This is a varied album, changing pace with every song (and sometimes within a song), with Kevin and Anita taking turns at lead vocals. There's a big 'but' involved, however, as only a couple of songs (Drown Them Out, From The Devil Himself) step up from wallpaper - more songs than not start and finish without anything interesting having happened. If the title suggests some goth punk rave up, no worries - it's not that interesting. The duo seem nice enough, and the album is also, but there's no reason to invite them around for dinner.