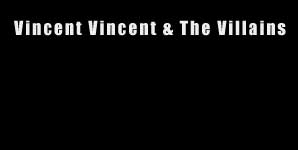 An odd day involving me coming back from London to see a band from the big smoke playing in my home city of Leeds! This was the second time I'd seen Vincent Vincent & The Villains at the Faversham this year.

At the start of the year they were my big tip to make it big this year. Although this has so far failed to happen I still see big things in the future for Vincent & his Villain buddy's.

With a sound unlike any of the current crop of Indie, Indie and more Indie bands they play the most fantastic 1950's Rock and Roll music with meaningful lyrics to match. Talent is a word often overused in the music industry but if talent by a live musician is to sound just like they do on the record and entertain the crowd then VV&TV have it. Where can you see people jiving and bopping stage front? It's a refreshing change from the usual jumping, stage invading, crowd surfing and beer bottle throwing that accompanies too many gigs nowadays.

Prior to the Villains hitting the stage a Cricket Jumper wearing Mr Hudson & his steel drum band The Library were on stage. He described himself as R&B however I would suggest a more reggae vibe from the steel drums was the case. Mr Hudson was armed with an acoustic guitar whilst The Library had steel drums and an electric guitar amongst their armoury.

As for their performance, it was definitely something different. Their use of steel drums is unique and could be a clever selling point. Fairly pleasing to the ear although the difference between tracks wasn't too noticeable. One to watch out for in the future is the best suggestion.

The headline act came on shortly after ten. Despite the sparse crowd Vincent implored them to move closer to the stage, which they duly did. It didn't take long for the crowd to begin head nodding and toe tapping along to the opening number.
A set which included previous single 'I'm Alive', both tracks that will be on their forthcoming release the crowd favourite 'Johnny Two Bands' and 'Seven Inch Single' was both pleasing to the ear and to the eye. Vincent has an endearing stage presence, whether it's his wide mouthed wails or his open eyed facial stretches he gives each song personality.

Lets not forget the Villains either, with some deep thumping drums from Alex, great guitar support from Will on bass and Tom on lead guitar. The Villains are more of a band now than ever before. At the start of the year they were my tip for success. Lets hope the numerous fine live performances they put in along with their 1950's Rock & Roll music nicely fused with a Pop culture sound will stand them in good stead for an album deal in the near future. I am looking forward to their next single. The man behind the Villains, manager Buddy Rackett is keen to say 'Watch for them, ask for them.' and on tonight's performance who could argue with that statement? 2006/2007 the year's of the villain? Watch this space.