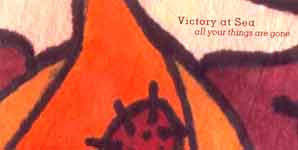 The 6th album from Boston band Victory at Sea is easily their best. Imagine, if you can, Keane fronted by Debbie Harry, and with the darkness and goth drama edged up to 10. Piano-driven, but with edgy guitars in the mix, the music is as dramatic as it comes, but without ever flipping into melodrama. The album updates bands like Joy Division to sit alongside new icons like Cat Power, by overlaying melancholy vocals over sombre, but upbeat and catchy instrumentation. In Mona Elliott, there is a great front for a wonderful slow burn band, where songs like No Reason To Stay burrow deeply into your subconscious before you know it, like some addictive chemical. A band that deserves a much bigger airing over here.