Review of The Secret EP EP by Vib Gyor 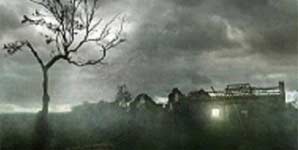 It's only a couple of years since Vib Gyor were the hottest name on every A&R man's lips. At the time, if any bookmakers had been taking bets on who was going to break into the big time from Leeds' underground scene the smart money would have undoubtedly been on these guys.

Of course, avid viewers of the annual Grand National steeplechase will know what can happen to odds-on favourites, and a similar thing occurred here, as Vib Gyor - an acronym for the seven colours of the rainbow in case you're wondering - seemed to disappear without so much as a trace let alone a six-figure record deal.

So into 2007, and with Leeds having proved to be a hive of musical activity and above all eclecticism, Vib Gyor are still there, plugging away, engaging in their own take on the post-'Kid A' soundscapes that many a band has delved into since without quite pulling it off.

What raises Vib Gyor above most of the competition are the vocal talents of David Fendick, whose effortless switches between assertive howl and operatic falsetto make the likes of the title track and 'Scanners' quite plausible, if a little generic musically. Which is a shame because for a while back in 2005, this band really did sound like they were re-shaping the future of music, whereas now there is a definite twinge of bitterness as reality hits home that their once-inventive take on accessible post-rock has been left behind to decay, albeit gracefully.

Still, all is not lost, and even if the big boys wouldn't take the plunge and put Vib Gyor's records out, there was always gonna be someone who would.