Review of From The Very Depths Album by Venom

One of the great things about music is that, despite the suits attempting to render everything down to a brainless lowest common denominator, its occasional feats of randomness cannot be predicted. You can't imagine, for instance, that G.C. Coleman thought much of the drum turn he contributed to 'Amen Brother' when recorded by mediocre soul outfit The Winstons in 1969, and yet sampled, it became a staple of literally thousands of drum & bass tracks 25 years later. It's this absence of logic that's partially what keeps us all so fascinated; it's a place where anything can still happen, and probably will. 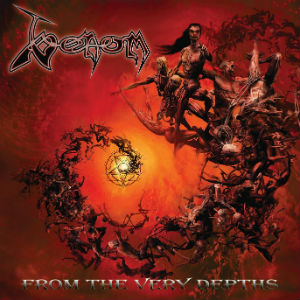 Case in point, on their emergence amongst the New Wave of British Heavy Metal in the late 1970s, Venom were regarded in most circles as suffering from acute self parody. The Geordie trio - led by Conrad "Cronos" Lant - were less than perfect as musicians, these critics said; their lyrical obsession with Satan and all things Hammer House of Horror an unfunny hangover from Black Sabbath. The naysayers probably felt some sense of vindication in 1981 when the band's début album 'Welcome To Hell' (subtlety was another man's problem) lay prone in the shadow of Iron Maiden, before its follow up 'Black Metal' met with largely the same fate. And yet, unbeknownst to everyone, an unlikely seed had been planted. Within a couple of years, the album's title was widely being used to describe a clutch of mainly European bands who'd taken its original precepts literally, when we were still chortling about how ridiculous they were; the music they produced was fast, guttural and intimidating, far bleaker than the pantomime stuff which had inspired it.

With this unlikely legacy now well behind them, Venom - with Lant now the sole remaining original member - have continued to spread the good/bad Lord's gospel pretty much ever since. 'From The Very Depths' is their 14th album and the first for four years, but those who like to throw up their horns will be pleased that age doesn't appear to be mellowing them.

It also has to be said that, presumably with Lant selling his soul at some point in the distant past, if he wished to be the world's best songwriter old Nick has double crossed him. True, it's not like the new band members don't know their places: there's plenty of mischief here, and lots of low end grind. Just in case anyone has wandered in off the street out of curiosity, songs entitled 'Mephistopholes' and 'Stigmata Satanas' will have them clutching their Rosary beads in fear. But equally both are otherwise unremarkable thrash-punk, by-the-numbers scions of a movement which lost its ability to shock decades ago.

With tempo and inspiration lacking, even the slow spit-roasting pace of 'Evil Law' fails to conjure up much atmosphere, whilst the riffing/soloing extravaganza of the title track is technically proficient but unlikely to have villagers reaching for their pitchforks. What's frustrating is that there are occasional signs of life here, especially on the brilliantly tongue in cheek fight song 'Long Haired Punks' and also 'Grinding Teeth', which we'll bet you any money will be the only metal song this year to feature the words, "You're doing my f*****g head in".

The recurring problem though is that nothing here comes even vaguely close in terms of the original intensity and damnation of the bands that used 'Black Metal' as raw materials for their darker vision: for that, listeners would be better off with Celtic Frost's 'Morbid Tales' or Bathory's eponymous début. They say that the devil has all the best tunes: as 'From The Very Depths' unwittingly proves, this isn't always true.