Vega4 - You And Others Album Review

Review of You And Others Album by Vega4

Vega4
You And Others
Album Review 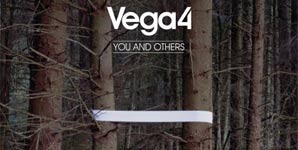 Currently on a UK tour, this quartet were multi-national quartet were introduced by mutual friends in London and bonded over a shared passion for music. This record took nine months to record due to producer Jackknife Lee having other commitments, but having worked with Bloc Party and the mighty U2, it's clear to see why he is in such demand.

The previous single "You And Me" begins the album with a throbbing bass and searing guitars and it comes as know surprise to find that another credit for Jackknife is The Editors. With a catchy chorus, it kicks off "You And Others" in the right direction, but the momentum is lost with the uninspiring indie of "Traffic Jam" and the formulaic "Tearing Me Apart". It is at this point that Vega4 pull off a masterstroke in the shape of the six minute "Life Is Beautiful", a track that begins in tender tones and ends in grand style, particularly by the time it gets to the final chorus. Johnny McDaid does his best Gary Lightbody impression to good effect, with the song not far off the emotional greatness of Snow Patrol's "Chasing Cars".

The second half of the album sees the band slipping back into mediocrity, "Let Go" being an example of the blandness that makes the skip button such a blessing. There are two exceptions though, "Paper Cuts" standing out for its dynamic character and the anthem that is "Bullets" benefiting from the bitterness of relationship turmoil. Vega4 have made a mixed-bag of an album, at times enjoyable and commanding, whilst at others highly uninspiring.