Review of Acoustic 07 Album by 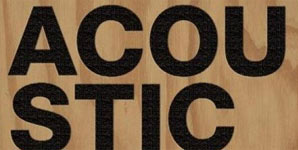 A double disc of acts grouped together like this is bound to send enough alarm bells ringing to dissuade any self-respecting music fan. The mere thought of a label deciding to release 38 tracks of acoustic artists throws up the gruesome prospect of a whole host of magnolia-shaded mediocrity and self-absorbed navel-gazing. Worse, it affords the possibility of a barrage of overly-tasteful Parkinson-approved jazz-lite, where a quick scan down the track list is enough to hospitalise those with weaker constitutions from an overdose of bland. So it is with some trepidation that your reviewer glances at the names on the CD. Hang on? No Blunt. No Morrison. And - thank the Lord! - no Jack Johnson! So now that the Axis of Evil has been banished, what exactly have we been left to digest?

Well, mercifully, the majority of acts here fall just the right side of interesting. Although there seems to be a little generosity with the term 'acoustic' - how else to explain the presence of Grandaddy's moist fuzz-rock? - this leniency allows for a broader sound palette, avoiding any risky over-reliance on earnest strummers. Thus Disc 1 opens with Jose Gonzalez picking and handclapping for Lovestain's two minutes before Rufus Wainwright blows his wad all over the shop with the utterly delirious horn-fest Beautiful Child. Disc 2 also gets off to a flyer; Iron And Wine serve up the highlight of the compilation with a sublime moment of fragile mortality in Naked As We Came, and this is followed immediately by Duels' stately The Slow Build. Indeed, there is high-quality variation across the CDs - Espers' narcotic avant-folk rubs shoulders with Maximillian Hecker's cheerily cheesy pop, while Bright Eyes (as if Conor Oberst would be left out of an acoustic mix...) finds himself sandwiched between Bat For Lashes' wonderfully gothic charms and the now ubiquitous Peter Bjorn & John Young Folks whistleathon.

Those tracks comprise your golden wheaty goodness then, so where's the chaff? Well, Chris (son of Steven) Stills fails to excite on When The Pain Dies Down, and Rosalie Deighton's country ballad Wagon Wheel is little better than Dawson's Creek fodder. Elsewhere, Fionn Regan's Put A Penny In The Slot falls just the wrong side of self-consciously cute and as a result his effort comes across as a little cloying. Nouvelle Vague's take on Heart of Glass is unfortunately one of their weaker reworkings while Duke Special moves ponderously nowhere in particular.

Ultimately there is too much here to absorb in one go, and too many artists to discuss - even getting through a single disc is quite some task, as attention flags near the end of the 19 tracks. The subtleties of both Calexico and Vetiver get lost from being too far towards the end of their respective CDs, and the tempo during the second half of Disc 2 is perhaps not as varied as it could be. On the whole however it's a fine cross-section of the genre, even if such definitions are misleading.