Review of Frequency Album by Ummagma

A couple of years ago Ummagma's Shauna McLarnon and Alexx Kratov ran away. Their flight was not from condemnation, or prejudice, or the mundanity of a civilised existence, but from war in the Ukraine, the country which they'd called home since relocating there from Moscow. A couple romantically before they became performers, they're now based in the more pastoral setting of Whitehorse in Canada's Yukon territory. It appears to suit them: on the evidence of Frequency their displacement hasn't had the sometimes-effect of narrowing perspective, instead giving them the innocence of emigrees in a more welcoming environment, the ensuing quest for a new musical identity one they've described as a "Search for optimism". 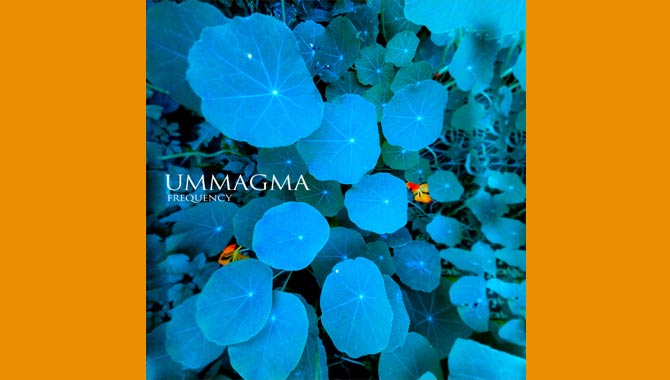 With their domicile settled, they've now had the space to follow up 2012's simultaneous twin releases, (One eponymous, the other titled Antigravity). Seemingly fascinated by the elemental, the pair's dynamic is mostly full of bliss, their music by turns bold, delicate and opalescent; McLarnon's voice is not dissimilar to Kosheen's Sian Evans and never less than completely enveloped in each note. That said, Frequency still only offers something of a halfway house, comprising five new songs and three remixes, but if it feels a little slight, there's still reward for dreamers and their wishes.

Opener Orion - first words "Cosmic lover/Made up my mind/I'm not going home" could've floated away on its own naiveté, but the lustre and warmth in its raindrop keys banish any lingering doubts of twee. The centrepiece here though is Lama, which appears both in its original and three remix forms: untinkered with, it's an outlet for Kratov's angular guitar lines and shows an undercurrent of more steel than elsewhere's rainbows, whilst of the versions as expected former Cocteau Twin Robin Guthrie's hazy, angelic treatment narrowly surpasses a Lights That Changes turn long on playful synth pop phrasing.

With its roots in escape and redemption, it's perhaps inevitable that Frequency ends up looking outward, making big sketches from high concepts. It's a slightly altered reality which requires the listener to work with it a little, particularly on A Winter's Tale, a slightly awkward composite of  cocktail lounge chintz stapled to the horizon-gazing of Beach House, whilst the frosty neo-classical ambience of instrumental Galacticon draws a line backwards perhaps to the emotional austerity of a conflicted past.

On being questioned about their influences, McLarnon has been known to reel off a comprehensive list including shoegaze, post punk and ethereal wave as well as many others. Like a recipe, some of these essences come to the fore according to taste, but the formula works best on the tantalisingly brief Ocean Girl, it's sweet harmonica playing off against Kratov's translucent vocals, the premature ending a jolt of abruptness like a corner in the mind suddenly turned.

Frequency then is a sort of new-age record, without the crystals, auras or gnosticism: in a world where suckers are almost never given an even break, its creators have embraced a life no longer on the run, and are making sounds with a consciousness that's intriguingly clear. Not perhaps for those who like to project blank self-appropriation of other people's ideals, the carefree lack of cool here is as welcoming as it's conviction.