Review of Shortcuts Album by Trip 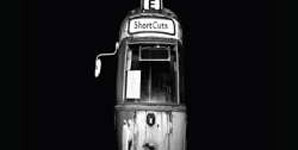 With the accompanying PR notes making much of Alex 'Trip' Child's skills as a 'Silver tongued spitter', stumbling across ShortCuts you might forgiven for expecting to hear the work of a ruffneck grime MC. Those looking for the new Bizzle however will be catching the last bus home with disappointment.

It starts well enough - if a little incongruously - with the chirpy geeza pop of Applecheeks and Rented, modern romantic vignettes for the tracksuit nation, complete with chiming guitars and showcasing Child's estuary vocal delivery. Both are undeniably low end chart fodder, but before you can say Illegal Pirate Material, the concept of quality is ditched in favour of covering as many bases of possible.

The musical setting wavers somewhere between meat-and-potatoes indie chops (Laundromat, Break The Jukebox, River Phoenix) and oversexed pop (Olympic Breakfast, Summer Sundays). At least The Gambler has a kind of soul, Child showing some empathy with the regret and loneliness of a potential suicide, but in general the theme - urban nobodies living their contemporary lives - has already been done to death: step forward Just Jack, Kate Nash et al.

The finale Who's That sees Child and a gurning studio mate ranting at tailgaters, spammers and celebrity acolytes, as well as declaring everything from Bono to Noel Edmonds a tit, presumably delivering his take on the decline of British culture. Perhaps a more appropriate observation would be that as the saying goes, if you're not part of the solution, you're part of the problem.

More evidence then as if were needed that Mike Skinner should still regard himself in deficit, regardless of how exhilarating that first ever listen to Geezers Need Excitement and Weak Become Heroes was. Ripe with derivation, transient and disposable, ShortCuts is like listening to a record made by the kid who climbs on your bus and puts his feet up on the back seat.