Toronto producer and MC Tre Mission follows up last year's critically acclaimed free mixtape 'Malmaison' with his debut full length LP 'Stigmata'. His blend of R&B, grime and rap comes out of Canada, via the Caribbean, with a distinctly West Coast flavour but has its heart on the East End streets of London. It's been spun and twisted to fit Tre's delivery and style but there's no doubt of the influence and character bestowed on 'Stigmata' by some of the UK's premier grime artists. 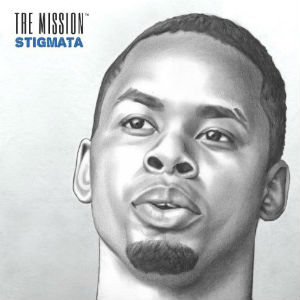 With 'Stigmata', Tre Mission has taken the East End to the West Coast and blended the gritty reality of street level culture with a bling my crib, pimp my ride sensibility. The fluid and polished production is fuller and less sparse than some harder, edgier, confrontational grime. Mission is smoother, more soulful and, as such to a large degree ('Jack Pot' ft. Skepta excepted), easier listening than some of the UK's more aggressive MCs such a Kano.

From the off, Tre takes us onto the '416' streets of Toronto, "This is for my ni**az on the strip", telling it as it is, no holds barred, heart on his sleeve, up close and personal. 'Stigmata', the title track itself, drops the bass deep and heavy but blends in some reverse beats, keys and high hats as Tre trades vocals with his partner, both scarred from a relationship in tatters.

There are collaborations aplenty on Tre's 13 track debut and none more successful than 'Real Grind', where Tre shares centre stage with Wiley. 'Rally' ft. JME takes a more dingy, scuzzy, subterranean, almost Roll Deep route to the floor whilst 'On Road' evokes old skool Dre. 'Get Doe' featuring Canadian 'legend' Saukrates lightens the production and raises a funkier beat to add another dimension to a multi-faceted album.

'Money Make Her' and the promiscuous 'Jessica' clearly have protagonists that have upset Tre, and Tre vents his anger and frustration on some of the album's darker and more sombre tracks. Mission, somewhat out of character in this genre area, clearly doesn't mind sharing his anguish and disappointment in a vivid and candid outpouring that shows the scars, rather than painting over them, in some act of false bravado.

'Stigmata' is a bold debut from Tre Mission, one that combines and collects with effortless ease to deliver a fusion of styles on a platform that crosses international borders. Potent and polished grime never sounded so good.