Trail - To The Rest Of The World Album Review

Review of To The Rest Of The World Album by Trail

Review of Trail's debut album To The Rest Of The World 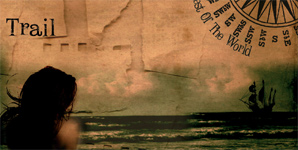 Trail's story to date is a mix of old industry fairy dust and spanking new business model. The London five piece raised o20,000 online using the pseudo talent spotting/wannabee industry mogul website sliceofthepie.com, but were then spotted by American producer Matt Wallace (Faith No More, Maroon 5), decamping to LA to record To The Rest of The World with him.

That Wallace heard something he liked is in many ways hardly a surprise; despite their British roots, Trail's sound is very much that of US college radio; a rush of arpeggiated guitars, yearning, doe eyed vocals and echoes of The Doors, Big Star and 60's garage. It surely won't have gone unnoticed by either band or producer that despite reaching its creative apex more than twenty years ago on R.E.M's towering Green , it's also still a popular formula, The Fray being the last million selling group to benefit.

There's also something to be said for refusing to adopt the sound of British pop today. In a way, the lack of chattering synths and Toyah clich's is almost refreshing, making the orthodox of two years ago unorthodox by choice. Openers 'Prism' and 'Flare' both have a quiet sense of yearning, singer Charlie Atif's mid-atlantic drawl wrapped around the band's sense of pathos and Wallace keeping things light and understated. Anyone who questions Trail's ambition however needs only listen to the guitar histrionics that finish 'Back Home', the swathes of Edge-like reverb and tremelo revealing their desire for stadium rock ministry, whilst the more muscular 'All Down' bears more than a passing resemblance to Incubus.

If To The Rest of The World has a fault - other than the bed-wetting alt.country slush of 'Worry Free' - it's that coming from a universe so well explored, it reveals little new; there's no 'Behind The Wall of Sleep' here, and certainly nothing that deserves to rub shoulders with 'It's The End of The World As We Know It' in the genre's hall of fame. Trail may have to follow the lead of the likes of Spacehog and Band of Skulls in becoming big over there before even thinking about the same status over here.