Autumn is here again which can mean only one thing; leaves & temperatures falling, nights drawing in and a raft of new releases and "updates" on the consoles. The main difference being as this is likely to be the last update for the current console generation before the next generation war starts in earnest. So another year on what have EA done with their flagship golfing simulation to entice you to part with your hard earned cash and buy their Tiger Woods update 2007? (We all know its 2006 but let's not split hairs at this stage.) 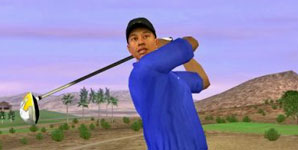 Your main update is a tweak to the seasoned PGA career mode whereby a new team mode has been introduced. In-between attempting to take the world of golf by storm individually, you will also be assembling a team to take on the best teams the world has to offer with the ultimate aim of playing and beating the esteemed Mr Woods motley crew of world beaters. This update aside, the basic premise of the game remains the same. You will get your "game face" on and create a golfer you will improve throughout the season until you are taking on the games greats on equal par. The team play facility also allows you to update your team mates to avoid getting your arse whooped as your opponents steadily improve. However, as always, the real draw that will keep you playing the game is the massive diversity of game modes at your disposal. From the standard match & stroke play to bloodsome, battle golf, longest drive competitions, greensome and fourball, there are a raft of golfing tests to keep you interested. As per usual you will enjoy a good choice of players and courses; 21 of each to be precise including the K Club for Ryder Cup replays. Just make sure the result stays the same and you will be laughing.

So what about the drawbacks? Well first off, the graphics engine has again been left alone. Whilst the graphics are not bad in anyway, the fact that they don't seem to have been updated even though we have had four or five updates in the series since Tiger's PGA tour appeared seems to be a backwards step. This coupled with the same old constantly annoying commentary banter of Feherty and McCord did just enough to annoy me slightly. Perhaps small changes are to be expected, not just in this update but updates across genres at the moment. With masses of development time being put into PS3 and Xbox 360 titles, should we have expected major changes in the current generation title updates?

So what's the verdict? The major gripes after playing Tiger woods PGA tour '07 are mainly linked to updates from its predecessors. If you are playing the game for the first time, then there is quite simply no better golf title around and Tiger Woods '07 is the culmination of five years development and still an improvement on what has gone before. As I have played the previous titles I feel the need to be annoyed when the improvements that I would like to see made are not. My major grumble relates to EA expecting people to shell out top whack prices for a slightly updated title whereas the price of a platinum title for an update would probably be fair. The game in itself is probably worth a score above eight out of ten but for the reason just outlined alone, it won't receive it.