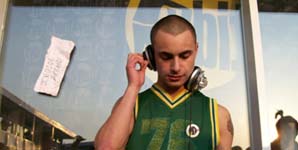 I haven't been to Wales since I was 12 years old and on a school trip to Mount Snowdon to spend a week in a tent in the pouring rain. So, when it was suggested I get myself to Prestatyn to attend the Tidy High School Romp at Pontins I was a bit dubious.

Would it rain all weekend? Would there be a mad teacher who liked us to bathe in freezing cold water? Would the food run out about the same time as my enthusiasm? Would I just hate the whole experience?

I'm glad to report that none of the above scenarios were repeated (thank god!)

Compared to Pontin's at Blackpool (where the New Year Weekender was held) Prestatyn is luxurious!

Instead there was the cream of the world's hard dance DJ's playing 3 nights of the best hard dance music to be had anywhere on the planet.

Friday night was the Freshers Ball and it was great to see so many people had made the effort to dig out their old school uniforms and that there was a fair smattering of headmasters to keep them under control (including one of the bar staff which was a little disconcerting.. I kept expecting him to say "Haven't you had enough yet, boy?")

Things had kicked off in good style earlier though, in the Queen Vic, where Adam Sharpe, Amber D and Dan Doran had left the crowd gagging for more.

At 10pm things got underway in the 3 arenas with Sam Townsend and Deano doing the honours on the main room, Kym Ayres in Room 2 (who was brilliant as always) and Shan in room 3.

Nick Riley and Andi Durrant were up next in the main room and played a blinding set.

They've been playing together for about 5 years and have to be one of the most eclectic DJ duos in the business.

The thing I always enjoy most about seeing them play is that you can never tell what you're gonna get next; their tune selection is not in any way predictable and there is almost always a surprise or 2 in the set somewhere.

I make a point of listening to Nick and Andi's shows on Galaxy, whenever I can, and would recommend you do the same.

You'll hear a comprehensive round up of everything that is good and new in dance, as well as favourites old and new. I particularly like the Sounds of the Underground section where things get a little bit dirtier than normal and new and aspiring DJ's and producers can get their stuff heard by a wider audience.

So wide, in fact, that between them they reach over half a million listeners every week! www.galaxyyorkshire.co.uk

As if this wasn't keeping them busy enough their Nu Breed Music record label will launch in April this year and will be a springboard for new talent from their radio show and elsewhere.

Over the rest of the summer you can expect to see them at the Gatecrasher Summer Sound System at Lotherton Hall near Leeds, Globalgathering and Creamfields, amongst others, and they'll be at Amnesia in Ibiza during the season.

I managed to have a few words with them after their excellent set and they told me how much they love playing at Tidy events. They've done 6 Weekenders, so far, and will no doubt, be doing many more.

Check out their site for full information. www.rileyanddurrant.com

Nick and Andi were followed by Lee Haslam.

As you might well know, Lee was Head of Music at Tidy for many years and only recently left to concentrate on solo projects.

All I can tell you about his set was that it was brilliant. I've seen Lee a dozen or more times and have never been disappointed.

I've seen him play trance, both hard and funky, and uplifting and hard house as intense as you could want it and this set had all of this and more.

The room was electrified and energised and I just felt sorry for those people who could only hear it on Galaxy FM because they missed a special treat by not being there in person. . www.leehaslam.com

After Lee had finished I went over to Room 2 to catch Cally Gage, who I've never seen before and I was not disappointed. She played a blinding set to a packed room and I, for one, was left wanting more.

Saturday got off to a great start for me (albeit at 2 in the afternoon) when I wandered into the Queen Vic and found the Funkedupdjs on the decks.

I can say with my hand on my heart that I have not enjoyed a set so much for years. Everything about it was excellent; it had phat beats, great vocals, seat edge build-ups and breakdowns and Shaun and Keiron loving every minute of it.

I did feel a bit sorry for the poor old doggies spinning round and round on the decks, but hey.. at the end of the day they were just stuffed toys ?

If you haven't seen them before I suggest you check out their schedule and get yourself along.

Another highlight of Saturday night, for me, was Steve O'Brady. Again a DJ I've not seen before, but one I'll definitely be seeing again.

Steve was playing his first Tidy Weekender, but I doubt it will be his last.

This 25 year old is from the Leeds area, but has been causing a stir further afield in the past year, or so. He has been Djing for about 3 years, now, and has a residency at the very excellent Parlez-Vous in Bradford (first Saturday every month).

He is signed to UDJs and Frantic and I get the impression this is a man on his way to the top. www.steveobrady.com


Finishing up proceedings in Room 2 was Andy Whitby. What a set!!

Playing classics such as Ingo - Ready for DJ's and a bounced up remix of Rumble, Maddox and Matt Lee's 'Party People' mix as well as DeLeon and Hinsley's 'Systemsux' and Paul Glazeby's 'Kick It' amongst others the audience was going wild and when 'Kick It' finally dropped the crowd just stopped and clapped!

His own remix of Bliss Inc's 'Faith and Matt Lee's 'Go' (surely one of the anthems of the last year) were also definite crowd pleasers.

I thought I caught some of Gigi Pussy's Spanish Bounce stuff in there somewhere, too, but I can't be sure. Maybe someone out there can tell me?

For me this was a set delivered by a DJ who is absolutely at the top of his game. The cutting, chopping and bass drops were executed with absolute skill and flair and there wasn't a flaw in the whole set.

Check out www.keepitwhitby.com on DSI

That brings us to Sunday afternoon. I went to the Queen Vic to catch Rob Tissera who, I assume, was going to be doing a funky set.

I've seen (and written about) Rob many times in the past and I still say that his funky sets are, for me, better by far than the harder sets he plays. I know many people disagree, but if you get the chance to check out his playing at the excellent Kissdafunk nights he puts on up and down the country then do so. If you've only ever heard Rob play harder sets I think you'll be pleasantly surprised.

Unfortunately he was delayed somewhere after missing a plane, or something, and his slot was taken by Dan Doran who was doing an excellent job keeping the crowd satisfied.

You might imagine, after 2 full nights, that people might be starting get a little jaded and tired, but the pub was packed and I couldn't see a single person standing still.

Then word started to filter through that Alex Kidd was doing an unscheduled set outside someone's chalet so, reluctantly (because I was LOVING Dan Doran's set) I went over to see what was going on.

I could hear the music before I got there, but what I found was about 100 people in a semi circle around Alex Kidd and a set of decks and some of the best music I heard all weekend pumping out.

The crowd got bigger over the next hour or so until, I reckon, there were about 2-300 there all dancing in the afternoon sun.

This was one of the highlights of the whole weekend though Lisa Lashes didn't think so, apparently, when the Queen Vic emptied as everyone piled over to hear Alex.

It was reported to me that she threw a strop and there was even some booing going on when she totally destroyed the great atmosphere that Dan Doran had built up. This resulted in her packing up and storming off, apparently.

Whatever the truth of that, she certainly more than made up for it later that night when, with the aid of the fabulous Lashettes, she played a blinding set in the main room.

Prior to that, in Room 2, Dark by Design had blown the place apart with an hour of banging hardcore accompanied by one of the best light and laser shows I saw all weekend. I don't know who was in charge of the lighting that night, but he deserves a medal!

So.. to sum up the whole weekend I would say it was another totally Tidy success.

The venue was fine, the music outstanding, the punters well up for it and the weather was good (anyone who was a the New Year Weekender in Blackpool will know what a blessing good weather was this time!!).

If they don't believe you tell them to get themselves to a Tidy Weekender.

And if that doesn't convince them it just proves that they're dead!