Review of Snakes and Ladders Single by The Official Secrets Act 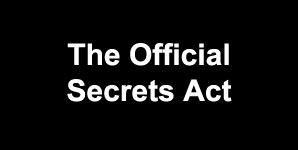 The Official Secrets Act are definitely a surprising band, you would likely prejudge them, write them off as another awful Indie band, but they are really not at all bad.

They maintain one of the most distinctive and original vocal tones that you'll ever have heard, blended with exhilarating and euphoric instrumentation. 'Snakes and Ladders' is a dynamic, vivacious and audacious stab at an Indie anthem.