Review of Push and Pull Album by The Human Value 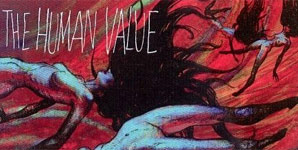 Now here's a stinker if ever there was one. I very nearly didn't make it past track one, which is uninspired, stylised, vaguely Goth-ish plod rock of the worst kind. It repeats itself a lot, but without having much to say. Track two follows a similar template but with worse lyrics and I began to wonder whether this record might have been a contender for some sort of 'Worst of ...' award. Track three saw my CD player go into open revolt and start to skip horribly - it's always had good taste.

There's no real discernible change in tempo or glimmer of anything interesting until track five, 'Complications No. 2'. This features a background wash of guitar like a squadron of World War Two bombers being chain sawed to bits while still in flight, and a female singer doing her best Siouxsie impression. But when the riff kicks in, we're back to plod rock territory with something of a bump. Track six is a stab at a pop song that comes across as a box-ticking exercise, and track seven has a riff that you can predict the last chord of before you've heard it for the first time. It's all a bit feeble, formulaic and tired, to be honest.

Track eight, 'Alibi' tries to repeat the trick of 'Complications No. 2', but fails to do so. Track nine, 'Parts', at least has some get-up-and-go about it, but again it's let down by a weak, weak riff. There's a nice bit of delayed feedback at the start of 'Home Is Not Real', before off we plod again in the same old furrow. It's not until the last track that we hear anything a bit different - a piano - but it's pretty much a retread of 'Drowning in Berlin' by The Mobiles with the hooks and fun bits taken out.

Thirteen tracks of weary slog later, I'm left shaking my head as to just how wrong this album gets it. There's little here you won't have heard before - dome better, I might add - and I am flabbergasted that so little imagination has gone into the whole project. If you're after a reasonably priced turkey this Christmas, you could do a lot worse.